Drones, which were once a preserve of the military, are taking over our skies and are providing solutions to some of our pressing needs

Every morning, Sam Mwaigwa takes his spray can, nozzles up and connects it to a sprinkler pot at one of the 10 greenhouses at Jomo Kenyatta University of Agriculture and Technology. He takes between an hour and an hour and half to get the job done.

While training in China, Mwaigwa, who is a post-graduate research assistant at the university, says they used an unmanned aerial sprinkler that could irrigate 50 greenhouses in 10 to 15 minutes. This is the power of unmanned aerial vehicle technology, commonly referred to as drones, which are increasingly being used in many facets of our lives.

Made of light material to reduce weight and increase control, drones are equipped with state of the art technology such as infra-red cameras, mounted with GPS and laser equipment and are controlled by remote control system from the ground.

Up until a few years ago, drones were a preserve of spies and the military who use them in situations where manned flight is considered too risky or difficult to reach. The military also uses these light aerial vehicles to conduct precision strikes which minimises casualties on the part of the security forces. 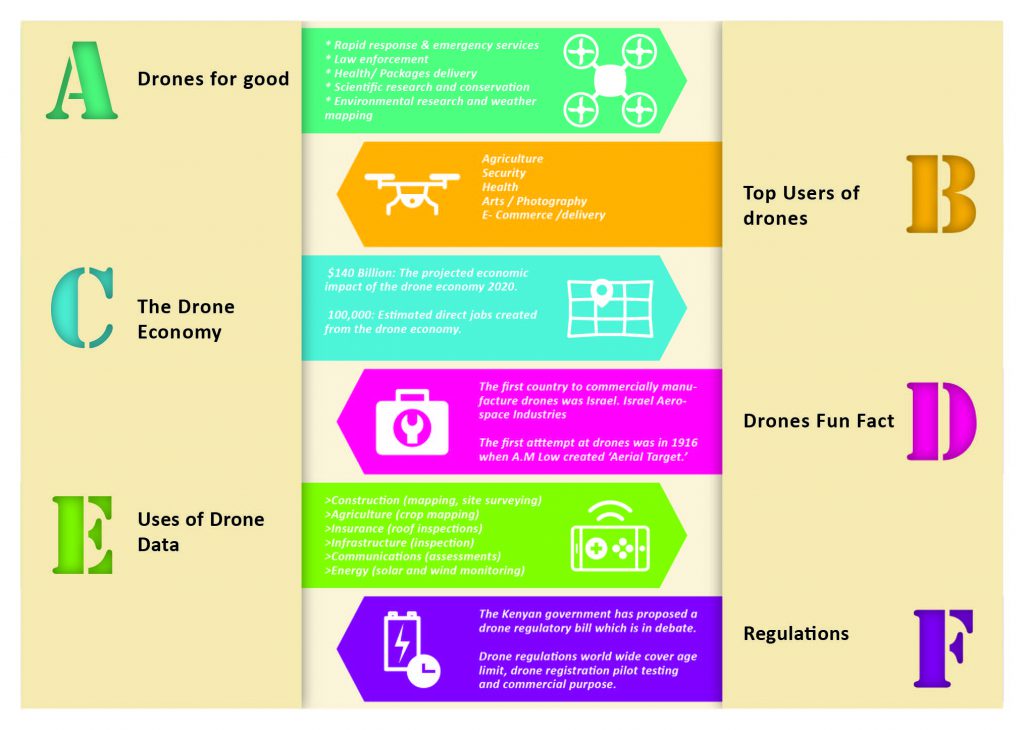 Rwanda, a towering giant in matters tech, is already using drones to deliver medical supplies, including blood, in rural and hard-to-reach areas. The blood deliveries began in 2016, when the country’s health ministry entered into a partnership with Zipline, the world’s first national-scale drone delivery network.

Today, if a doctor at one of the 12 clinics where the drones reach needs blood, they only send a WhatsApp message or order through Zipline’s website. The drone is dispatched immediately and the doctor gets a confirmation message saying that the drone is on its way.

The drones, which can fly at speeds of up to 70 kilometers per hour, can make as many as 150 deliveries a day. According to the Rwandan health ministry, their use has helped cut maternal deaths in Rwanda – a quarter of which are as a result of blood loss during delivery.

Media houses are increasingly using drones as a vital form of visual storytelling, from a bird’s eye view. For example, major news houses relied on drones to get up-to-date photos after multiple hurricanes wreaked havoc in the US and the Caribbean last year.

Greg Agvent who is a director of CNN Air (the news channel’s drone division), drone footage provided viewers with a heightened “context, perspective, and understanding” of the hurricane’s devastation.

It is also cheaper to use drones to take aerial shots as opposed to commissioning a helicopter.

Drones are helping farmers, especially those with hundreds of acres, make informed choices about their crops. The use of drones has given rise to a concept referred to as precision agriculture whereby a farmer is able to conduct soil health scans, monitor crop health, plant, apply fertiliser, spray and irrigate the fields.

Images captured by the drone can also map areas of a farm where there are diseases.

It is hard to have eyes in an entire forest or to employ personnel to keep poachers away. There is no better way to keep an eye on the animals than using unmanned aircraft, which makes drones an important tool in wildlife and environmental protection.

This is because they offer quick, easy and cost-effective aerial imagery which can be used to make decision on how and when to respond to situations.

Here in Kenya, the entertainment industry was the first to harness the power of drones. Primus Media, an events company, started using drones to shoot videos. MicroDrone Africa is a Kenyan based company that specialises in aerial filming and photography. The company has been used to take captivating shots during the safari rally.

Online shopping firm Jumia has initiated testing to have drones used in delivery of purchased goods, which would reduce costs and time taken to make deliveries.

Nowhere is the usefulness of drones more pronounced than in disaster mitigation and in search and rescue. In Tanzania, drones are used to conduct mapping to measure disaster risk. In conjunction with the World Bank, the NGO ‘Drone Adventures’ maps out 3D models with data collected by drones predicting accurately where flood waters will go which helps avert disasters.

When the search for the remains of the Malaysian flight got more intense, drones were deployed to help search for survivors and locate bodies.

There is no predicting how drones will be used in future. But whatever the case, they might just start delivering pizza at your doorstep.

Finding opportunity in a pandemic