Finding opportunity in a pandemic

The students are home, and it’s quiet at the M-PESA Foundation Academy, but with the coronavirus came an opportunity for a lab technician at the school to develop a new skill

As the Kenyan government scrambled to put in place measures to limit the spread of the coronavirus, the M-PESA Foundation Academy was handling a related issue.

A group of students had just come back from a visit to the US early March, and were to be quarantined for 14 days. Their luggage and the bus they had used from the airport also needed to be sanitised.

The school did the necessary and procured the sanitiser and disinfectant for use by the students and for cleaning their luggage and the bus.

As this was going on, one member of the staff – a laboratory technician – saw an opportunity to bring on board their skills from the lab to develop sanitiser.

John Francis Chiira noticed the ingredients used to make the sanitiser were accessible and the process to create their own was not complicated. 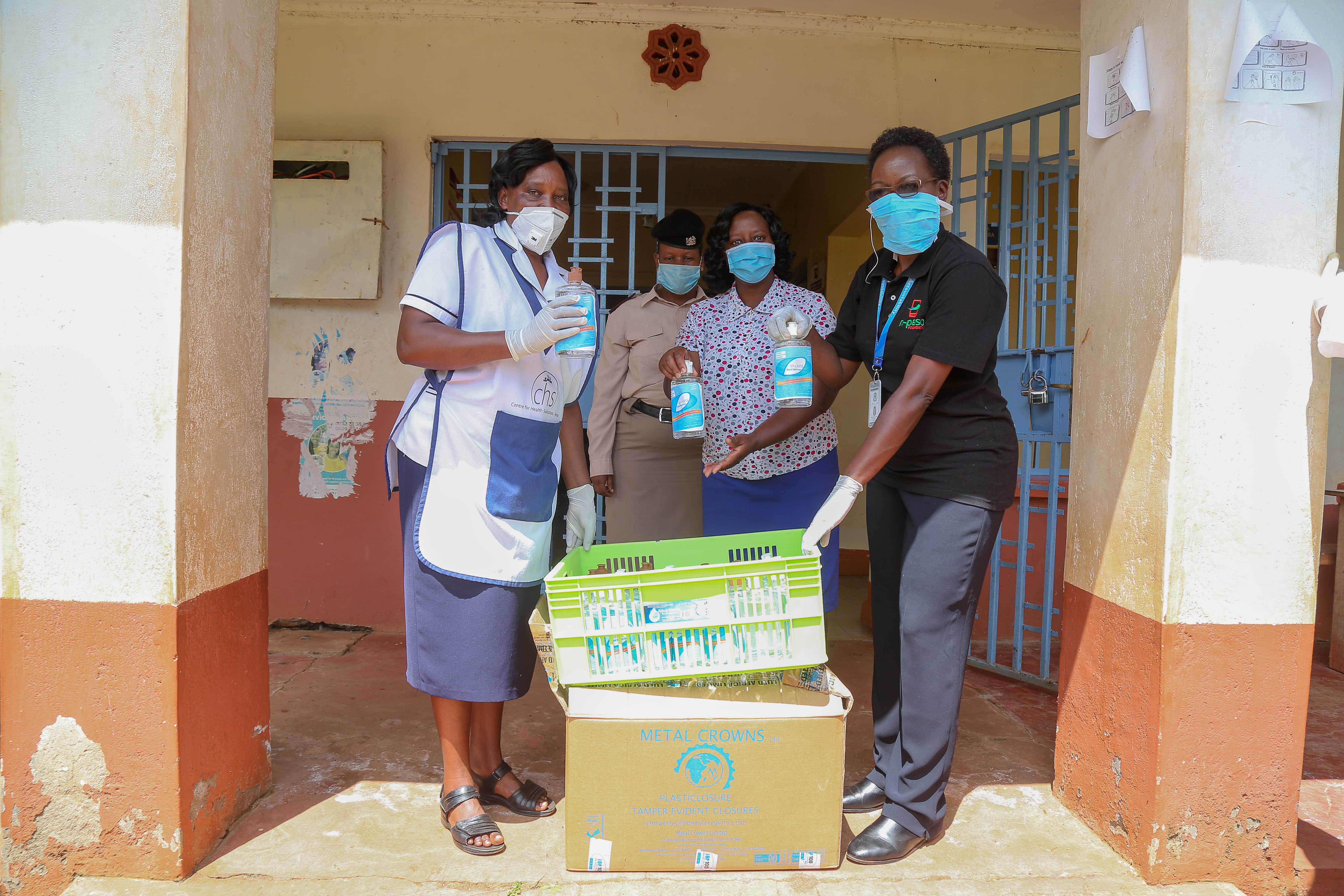 This would not be a first for him. He has experience in making the detergents, bleach, hand wash, fabric softener, and stain remover that the school produces, which have been certified by the Kenya Bureau of Standards (KEBs).

“After having a discussion with Francis,” said Rhoda Igosangwa, Facilities Manager at the Academy, “He said that’s something he can produce. However, we didn’t have the licence for that.”

To proceed, Francis needed to get a sample that he would send to KEBs for certification. He got to work and advised the school to procure  ethanol, hydrogen peroxide and glycerine.

For the sanitiser to be effective against the coronavirus, the alcohol concentration in the ethanol needs to be above 60 percent, according to guidelines issued by the World Health Organisation. The hydrogen peroxide hinders microbial growth while glycerine acts as a moisturiser.

The now-quiet chemistry laboratory at the Academy was the stage for the first-time sanitiser production using buckets, stirring sticks and the ingredients.

A few weeks after the idea took root in his mind, he had a sample that was needed for the process of getting the KEBS certification: making the application and buying the standards document, which details the standards expected of a product, raw materials and the product.

Francis then produced the first batch as guided by the standards document, made an appointment with KEBS to inspect the production facility for staff safety and environmental standards, and for the regulator to pick up a sample for testing.

“We have gone through that process and we have a certificate number. Now, we can produce as much as needed,” Francis says with pride.

With the certificate, the school can now add the KEBS certification to the sticker on M-Osha, the sanitiser’s brand name.

Francis is dreaming big. He sees a future where the school will have a production line, making the sanitiser, detergents, bleach, handwash, fabric softener, and stain remover for sale.

The institution is optimistic they will scale up production of sanitiser as regular disinfection of hands and surfaces is now part of the new normal with COVID-19.

Francis now supervises a team of 10 to make the sanitiser in readiness of the school reopening.

The students will also be taught how to make it, as part of the institution’s mission to not only transfer knowledge but to support the learners to venture into entrepreneurship.

“One of the major things we do as a school is the transfer of knowledge. Whatever we do in the school, we also train the students so that they can replicate the same at home. Ultimately, we hope that we can also produce it commercially,” said Rhoda.

The first batch of 400 litres of sanitiser the school produced in the second week of May was distributed to the local community in the Ngoingwa area in Thika town, the roadblock up the road at Maryhill Girls School on Mang’u Road, Karibaribi Clinic, Karibaribi Police Post and to bodaboda riders in Thika town.

One with the community

Rosemary Gathere, the local sub-chief, said the sanitiser would come in handy for the policemen at the roadblock, where there is a steady flow of traffic as the main artery into Thika Town and its environs from the agriculturally rich areas in Kiambu. 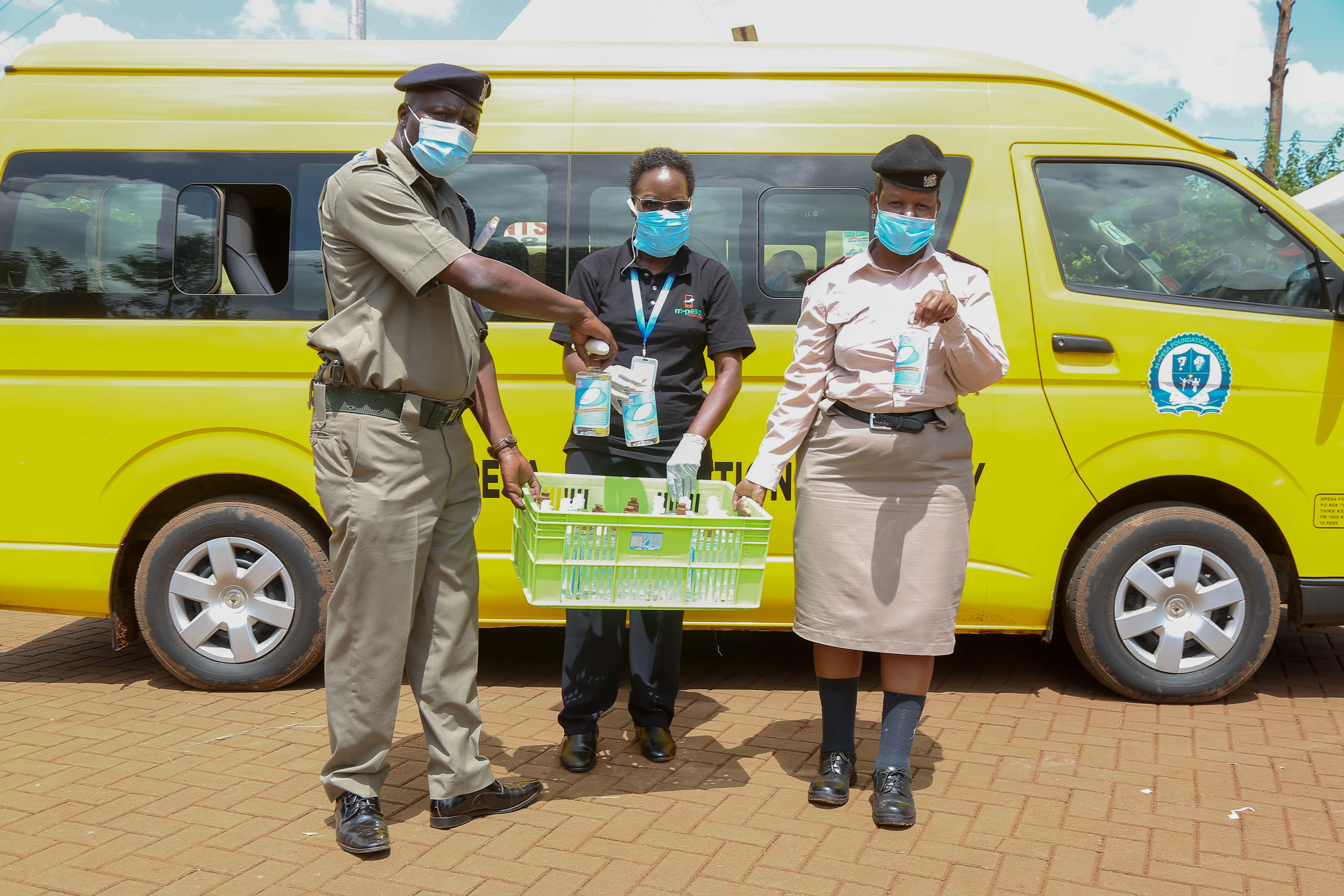 There is a lot of interaction between the policemen and health workers there as every person has to have their temperature checked and their papers scrutinised before they are allowed past.

“We are hoping things are going to improve because we are putting measures in place. M-PESA Foundation Academy has been of much help to us because it has been doing so much CSR to the community, and this has continued now with the distribution of sanitiser,” said Ms Gathere.

Donation of the sanitiser to the local community is not only in line with Corporate Social Responsibility but is part of the Academy’s recognition that it is one with the society in which it exists, adds Rhoda.

“Whenever something comes up for the good of the society, anyone is free to make suggestions, and this is one of those things. It’s just a small example of what the school is about and being responsible for what is happening outside and inside the school,” she concluded.

Safaricom of the future will ride on digital innovations