Their expansion around Nairobi and major towns has been gradual but consistent, and their branding calls attention to their stores, but there is much more to New Muthokinju Hardware.

You have most likely seen them. Or at least their stores with their name – Muthokinju Paints and Cement Hardware – in big white capital letters against a bright orange or luminous green background.

The neon lights go on at night, and the branding makes it hard to miss.

The signature hardware stores, currently with 14 branches spread across the country, were started in 1995 by Susan Muthoni Kimani and Barnabas Njuguna, the man in the photo above.

Their entry into the construction business was inspired by lessons from Susan’s experience in running a restaurant at Kenyatta Market, near Ngumo Estate.

They did not want to run a business selling perishable goods which would go to waste as they had seen enough of that with the restaurant, so they opted for a hardware store.

Two decades and a half later, they are glad they made the switch that would see the restaurant, Mama Safi, fold and Muthokinju become their next venture.

The business name, Muthokinju, is an amalgamation of their names, and would be known as the home for paints, cements, adhesives and decorating sundries.

Over the years, the chain of hardware stores has added ‘New’ to their name, noted tremendous growth and now has slightly more than 150 employees and 14 stores, with plans to open two more outlets before the end of 2020 and in early 2021.

The founders have since passed the baton to their son, Benjamin Njatha (in the photo below), who is the Managing Director, while his wife Sarafina Njatha serves as the Operations Director.

“I think, if there’s one big lesson I’ve learnt from my parents, it’s humility. Because they’re always humble, and still working up to date. They help us in different roles,” says Benjamin, who started learning the ropes of the business at the age of nine.

It has not all been smooth sailing, though, and Benjamin was recently reminded of his limits about three years ago as he set his sights on expansion. He calls it his ‘best mistake’.

“I wanted the business to expand more but I realized that you need to have a structure to grow at that pace. So I slowed down and went back to creating the right structures to make that happen,” he says. 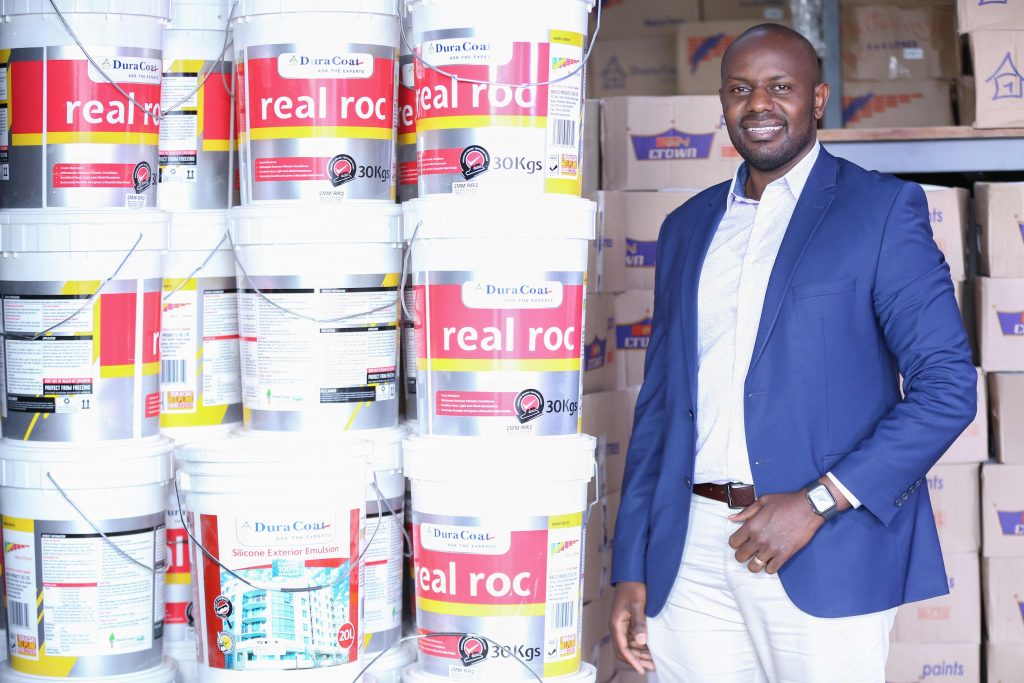 While 2020 would forever be etched as a tough year for many, the pandemic brought a silver lining to the Muthokinju business.

As people spent more time at home, hunkering down to limit the spread of the disease, they noticed a lot of things that needed to change in their homes.

“It’s interesting that people started decorating their homes more during these COVID times due to working from home. They want to upgrade their spaces. This saw an increase in paint and cement,” Benjamin observes.

The business responded to the initial limited movement in and out of Nairobi by deploying trucks to deliver supplies to customers who had projects under construction or those renovating their homes.

Muthokinju has capitalised on innovation to grow the business and improve the efficiency of its processes and services.

Over the last 10 years, specifically, its branches have been computerized and connected, and Benjamin can monitor the business from their head office in Imara Daima.

All the branches have been interconnected through Safaricom’s Internet for Business and they can reach each other through Fixed Voice.

Lipa na M-PESA is widely used for payments, which gained traction during the pandemic as cash payment was discouraged to minimize the risk of the virus.

The company has also found the M-PESA Bulk Payments Service useful during this period and they use it to pay drivers and casual employees.

“Safaricom’s innovation to always give solutions to our problems is a big reason why we have partnered with them,” says Benjamin.

Muthokinju is setting their sights on e-commerce for the future.

“In our next five-year strategy, we plan to go online in a big way to serve the customers who are not able to come to the physical shops. We’ve been given a lot of accolades by different partners, because of using technology to optimize our business,” says Benjamin.

Beyond selling paint, cement and other construction products, they now have an interior designer in each of their outlets to provide advisory services.

The interior designer advices customers on how to match colours and the right combinations for the different rooms. Staff at the stores have also been trained on this by paint manufacturers.
Muthokinju’s growth and reach is attributed to partnerships with different companies, which has had a tremendous impact in both its reach and growth.

Muthokinju’s legacy project is to give access to and provide affordable building materials.

“We do bulk purchases from manufacturers and pass the same discounts to our customers.” Benjamin says.

This story is part of Safaricom@20 celebrations. For 20 years, Safaricom has developed new technologies and innovations to support and enable Kenyans to communicate, connect and to go beyond.

Seven things we learnt from the 2018 Mobile World Congress