Thanks to the efforts of Jean Ngaiyo, Tendwo Mixed Secondary School in Eldoret has transformed into a school of reckon and record

Seven years ago, Jean Ngaiyo, the first principal of Tendwo Mixed Secondary School, a rural school in picturesque Eldoret, was faced with the task of making the dreams of an entire village come true.

At the time, the farmers in this village near Eldoret did not have a school to take their children to.

The closest school was a distance away, and it was becoming difficult for their children to get an education. With no land or facilities needed to start a school, they set up base at one of the rooms at a local milk collection centre.

Ms Ngaiyo says when she became principal of the institution, the school was bare and was faced with crippling resource shortages. Parents would take turns donating foodstuff for the children’s lunch. With no money to employ teachers, old students would volunteer as teachers.

“When I joined the school in 2010, we only had eight Form-One and seven Form-Two students. We didn’t have anything and so I had to start looking for financial support to buy land, build the school and equip the school,” says Ms Ngaiyo. 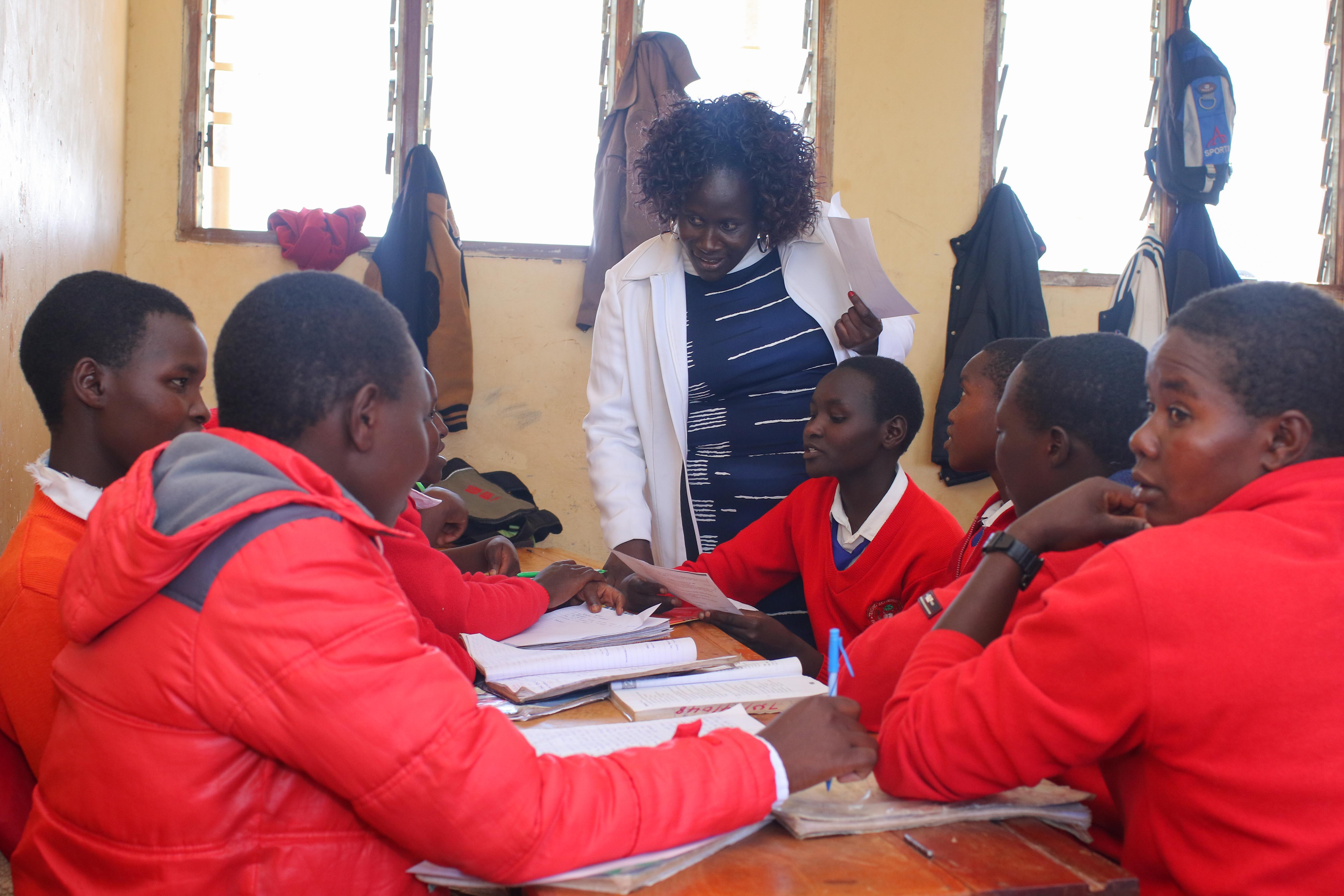 Jean Ngaiyo with some of the students of Tendwo Mixed Secondary School in Eldoret.

She says that she first contemplated leaving, unsure of how she would survive in this little community after being exposed to exciting city life.

But given the faces of the expectant students and the determination of the parents and the community, she knew this is a task she had to take up.

“I felt I needed to stay and make a difference for the children and the community. It wasn’t easy, but I have no regrets,” she says.

The quick-thinking principal decided to reach out to well-wishers in order to buy land and start construction. Through bank loans and support from well-wishers, the school was able to get enough funds for the worthy project.

In under one year, four classrooms had been constructed and furnished with desks and chairs. Toilet facilities for both the teachers and students were also put up.

In December of 2011, before pupils from neighbouring schools sat their KCPE examinations, Ms Ngaiyo decided to visit the candidates. She not only encouraged them but carried goodies meant to entice the pupils to join Tendwo.

And the principal was not done. The school did not have a library and Ms Ngaiyo decided it was time to take the bull by the horns: she wrote to Safaricom Foundation who donated books worth Kshs 550,000. The Foundation also donated equipment worth Kshs1.7 million for the laboratory.

According to the UN Secretary-General António Guterres, investing in education is the most cost-effective way to drive economic development, an aspiration that Safaricom Foundation holds dear.

“Boosting education standards in our schools is in line with the Sustainable Development Goal 4 which calls for provision of quality education for all before 2030,” says Safaricom Foundation Chairman Joe Ogutu.

Today, the school comprises of two classroom blocks, a science laboratory with a second laboratory under construction right next to it. Teachers too are motivated. Next year, she hopes to introduce computer classes. UNEP donated a few computers to the school.

“Now we have enough equipment and during practical lessons students learn like students in other well-established schools. And in the first year after receiving the equipment we posted very good results in science. We even had two A’s in Chemistry,” says the principal.

“Even if I leave today, I will leave a school which has what it needs to make learning easy for the students and teaching easy for the teachers. And I am grateful to all the key stakeholders for having supported me throughout the years,” Ms Ngaiyo.