Secrets of racing to the top

Edith Chelimo rises at the break of dawn every day to practice how to beat the world. She seldom takes breaks, and only for a short time when she does, just to make sure her body and mind are always trained at winning.

“I wake up at 5:45am every day to train. When I am done with a race I only rest for two to three days and then I’m back on the track,” says Edith Chelimo.

Chelimo lives and trains in Kapsabet, where the weather is perfect for running. Compelled to take up the sport because her family enjoyed it, Chelimo started training to become an athlete when she was eight-years-old.

More than two decades later, she has taken part in different races across the globe from Berlin to Paris and most recently won the Safaricom Iten 10km run and the Cardiff Half Marathon in UK half a world away in the space of a fortnight.

It’s not always been a smooth road.

In 2015 Chelimo fell seriously ill and this held her back from taking part in competitions, but she kept her hopes up. 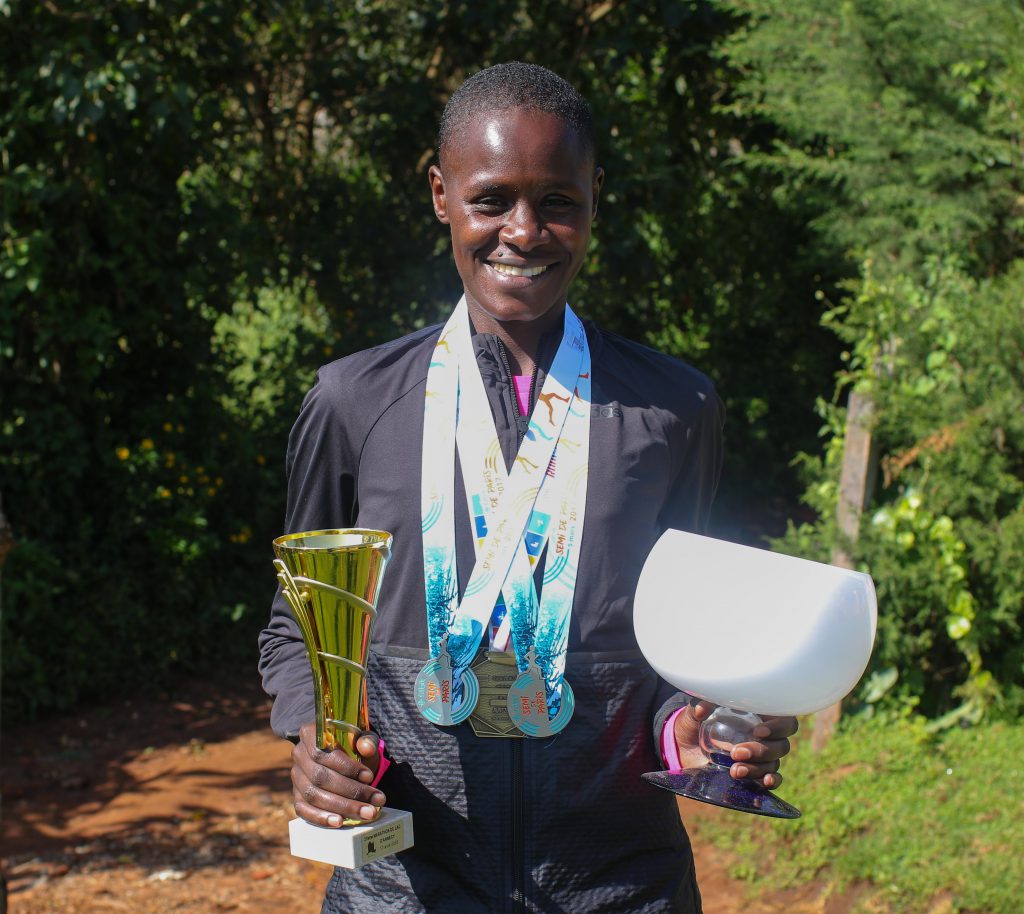 “In this life you don’t give up easily, you must work hard in spite of setbacks,” she said.

Her resilience and determination to get back in the game is what built her confidence and enabled her to achieve her ‘Performance Best’ during the Brussels 10km race in 2016.

During the eighth Safaricom Athletic Series held in Iten earlier in September, the 31-year-old athlete came first place in the 10-kilometre women’s category.

“I didn’t expect to be the winner. My main purpose was to gauge myself as a speed walk,” said Chelimo.

Though unexpected, it was a great win and confidence booster well ahead of the stiff competition she was preparing to face in Cardiff on October 1st.

“I am really excited. I was aiming for a time of 67 minutes but I made it in 65 minutes. So, the training was perfect for me,” says the half marathon winner.

Last year’s Iten race winners who last took part in the Cardiff half marathon were Peres Jechirchir who won the women’s race after clocking 1:07:3 and Geoffrey Kamworor who finished in a time of 59:10.

Not only did the duo win, they went on to break records in their respective races.

She also broke the UK All-Comers course record, moving up to sixth on the world all-time list.

“Until you finish you must keep up the winning spirit,” says the athlete. Chelimo has always known that she was born to be a champion and her biggest dream is to represent Kenya in an international marathon.

Chelimo stunned the world again when she ran to convincing victories at the Marselle Cassis, during the demanding IAAF Silver Label Road Race whose 39th edition took place on October 29.

The world champion who is not only an athlete but a wife, mother, police officer rolled into one affirms that the secret to winning is simple; “Just train hard, be yourself, believe in yourself and you will win easily. In of this you must believe in God.”

How ‘Thitima’ duo struck the right note with their offbeat track