Sanda’s reflections on sustainable business, community and her next role

In the wake of her appointment to the UN Global Compact, Sanda Ojiambo has had plenty of time to look back on her journey to the global office

One morning in 2009 then Safaricom Chief Executive Officer, Michael Joseph, forwarded an email to Sanda Ojiambo, who had just joined the firm as Senior Manager for Safaricom Foundation.

It was from the United Nations Global Compact, the world’s largest corporate sustainability initiative, following up on a report that was due. Safaricom had signed up to the UN agency the year before.

Still new at her role, she quickly learned that the company was expected to provide a report based on a framework on reporting responsible business principles.

“Looking back, the report was rudimentary but it broke new ground in as far as openly and transparently talking about pertinent [sustainable development] issues such as our carbon footprint and gender breakdown across the business,” she said in an interview recently.

Founded by then UN Secretary-General Kofi Annan in the year 2000, the UN Global Compact’s role is to mobilise a global movement of sustainable companies in the private sector. So far, 10,435 corporate and 3,000 non-business participants from 166 countries have signed up and are engaged through 68 local networks.

Safaricom has been actively involved globally, as well as in the local chapter.

Her work on the report marked the beginning of Sanda’s dalliance with sustainable development matters. Twelve (12) years later culminating in her recent appointment as CEO and Executive Director of the United Nations Global Compact by UN Secretary-General, António Guterres.

The report and Safaricom’s documentation on sustainable business have improved over the years, she said. The report is structured on the Global Reporting Initiative framework.

“We now do a primary sustainability report which is based on the GRI and then use that information to also submit to UNGC,” she added.

Until 2010, sustainability though not explicitly captured in Safaricom’s corporate strategy, was still part of its soul. Demonstrated, in the preference for clean energy sources to power base transceiver stations.

The sustainability journey continued to gain momentum in 2010 when the late Bob Collymore took over the reins from his predecessor, Michael Joseph. Bob would later sit on the board of the UNGC.

Bob initiated a conversation to structure and expand the company’s narrative concerning building a sustainable business. This led to Safaricom’s inaugural Sustainability Report, that is still published every year. The report set the trend for other private companies to follow in their steps

The Sustainability report heralded the True Value Report—first published in 2016—which estimated, in monetary terms, Safaricom’s total value to the economy. Highlighted in the jobs, taxes, and other benefits; as well as how the company affects customers, staff, investors, communities and other stakeholders.

“The report has helped demonstrate the firm’s impact, beyond profits and utility of its products and services,” she added.

“Safaricom continues to do a remarkable job adhering to sustainable business practices. For instance, 97 per cent of waste produced at the headquarters is recycled and we intend to do the same across the network of offices and shops across the regions. We also collect all kinds of e-waste for the country. Beyond that, we consistently work towards maintaining a family-friendly work environment, through facilities such as crèche and breastfeeding rooms, as well as flexible working hours and the option of telecommuting,” she said.

Sanda says while Safaricom “could be viewed as a small company on a global scale, it always punches above its weight.” She cited a Private Sector anti-corruption Bill that Safaricom led other private sector actors to draft in 2015.

As she exits Safaricom for her next challenge on the global stage, Sanda looks back with pride and more gratitude.

“I am most grateful for the exposure that Safaricom has offered me. Through the foundations, I have had the opportunity to travel to all the 47 counties, but one. This allowed me to understand Kenyans needs and to respond accordingly while building strong partnerships with communities,” she said. 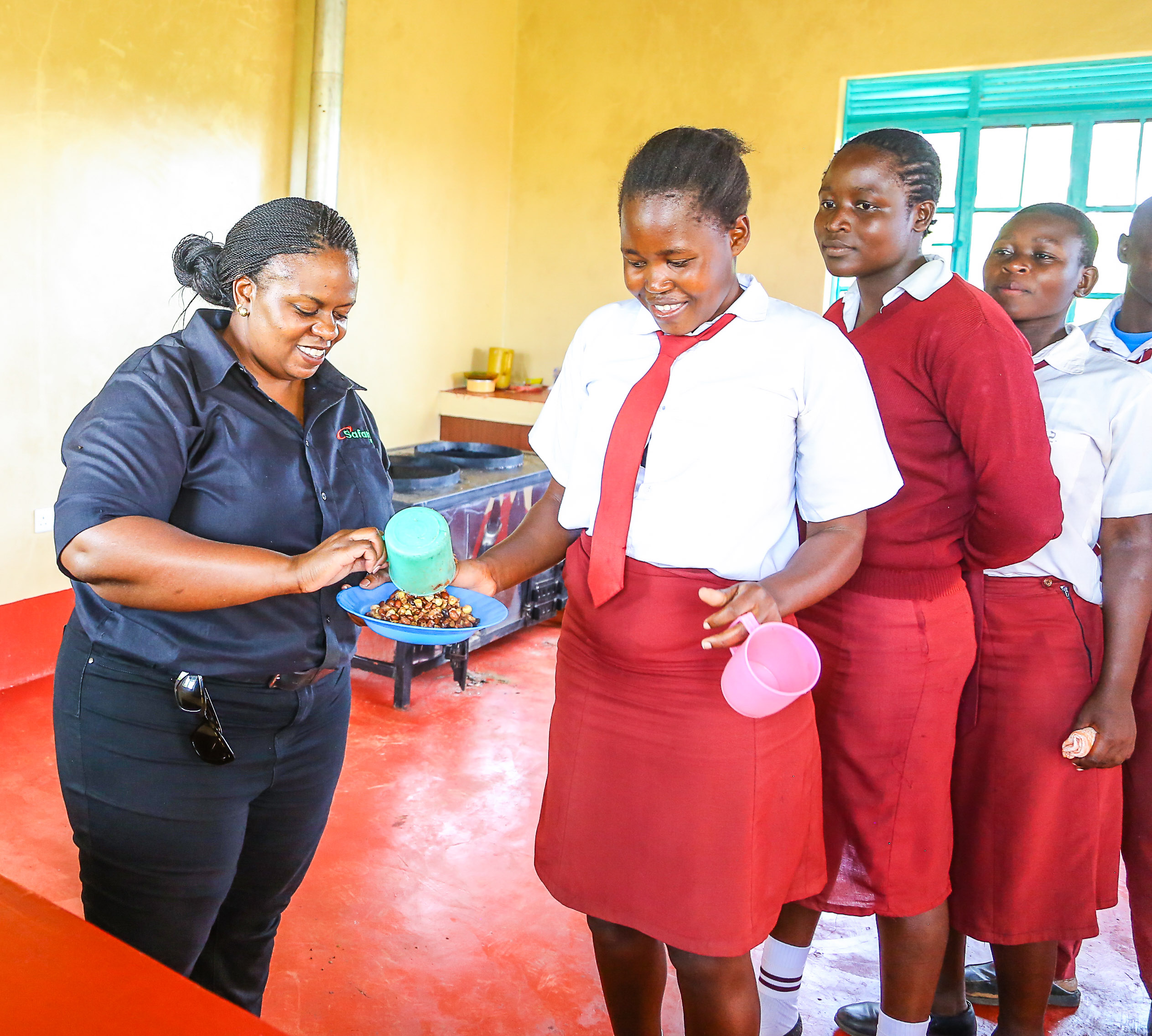 She traces her interest in the community to her childhood.

It helped that though she grew up in Nairobi, she had been constantly exposed to her rural community in Busia County.

“Over the school holidays, together with my siblings, we would go with our parents to Busia County, where we were involved in several community initiatives. This shaped my career interests and choices. I always knew that I wanted to work with communities,” she said.

This would see her don a hijab in the initial years of her career, starting at CARE International in Somalia before moving to UNDP Somalia. Her docket included education, maternal health, the environment, governance and capacity building. Some of her notable achievements at the time were, jointly with others, producing Somalia’s first United Nations Human Development Report that extensively guided development funding to the country. Another is initiating some of the first-ever reproductive health programmes in the horn of Africa.

She came back to Kenya where she worked at the International Planned Parenthood Foundation (IPPF) Africa Regional Office. At the Pan-African NGO focused on women’s health and rights, she worked in 40 countries across the continent for over five years. That role preceded her entry into Safaricom.

Over the years at Safaricom, her docket has grown. Her current remit straddles oversight of Safaricom Foundation and M-PESA Foundations, as well as Technology for Development initiatives that have incubated innovated local start-ups such as M-Kopa, M-Tiba and Digifarm, among others.

In retrospect, Sanda says her pursuit of the sustainability agenda has not been smooth sailing all through.

“When we started, we were met with a lot of scepticism. Many thought sustainability is something companies only do when they are strong and profitable. It took time as we proselytized that this was something to be done all the time,” she recalls.

It slowly bore fruit, as she built a tribe and ecosystem of people, speaking the same language, with whom she could benchmark, brainstorm and borrow ideas. She attributes the deepening of the sustainability agenda in Safaricom to strong and focused leadership, professional colleagues as well as a supportive and engaged team.

“I am grateful for the guidance and support of the Chief Corporate Affairs Officer, Steve Chege, that has enabled the innovation and growth in the area of sustainable business,” Sanda adds.

She takes over the helm of the New-York based entity on June 17 as the organisation marks its 20th anniversary and at a time when the world is enveloped by the COVID-19 pandemic that has disrupted business. Nonetheless, she still sees sustainability key for business arguing that:

“It is in times like this that the true value of a sustainable business can be seen.” Behold, a new dawn has broken at Torosei!

Mombasa to Malaba on M-Pesa