Inside Kenya’s new academy of hope

The M-Pesa Foundation Academy in Kiambu County is, whichever way you look at it, a true enabler of dreams 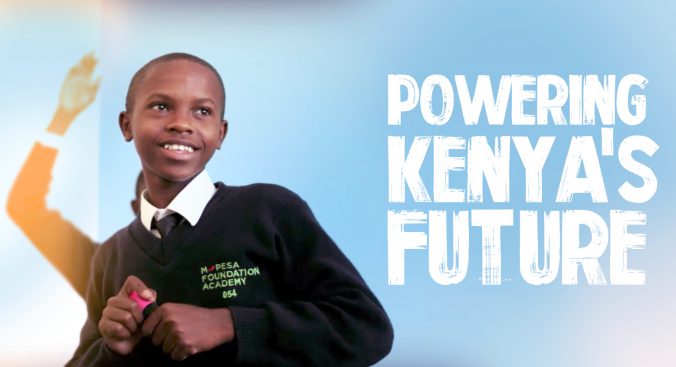 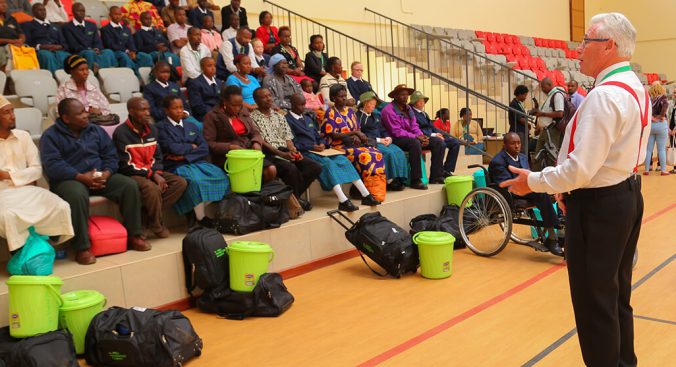 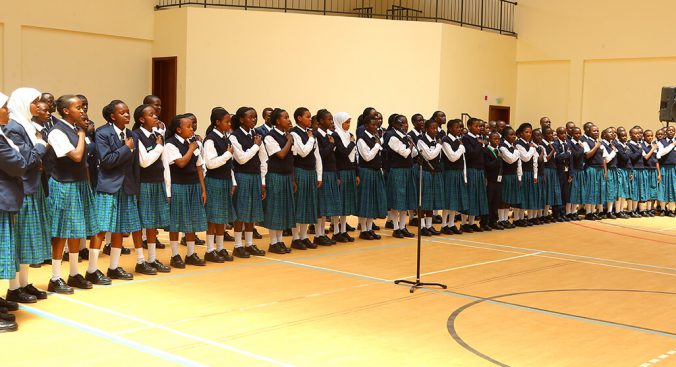 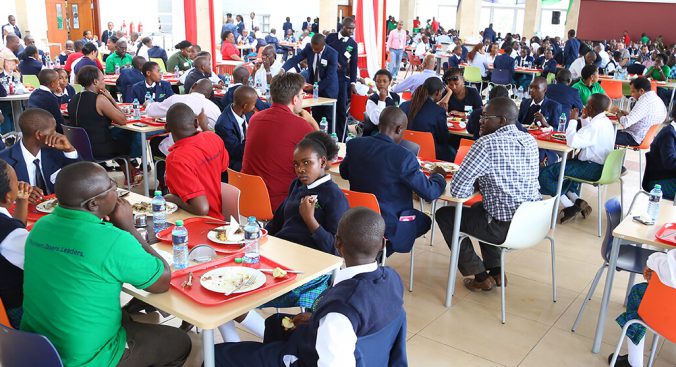 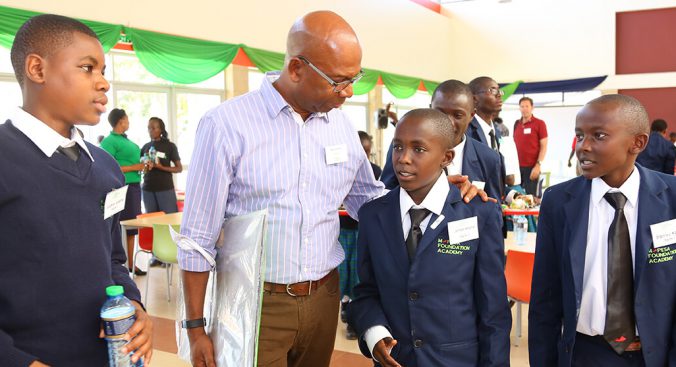 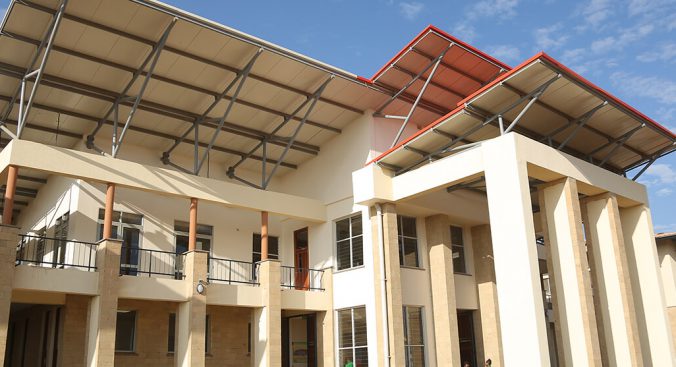 She has been brought up in a rural set-up where respecting elders often means not looking them in the eye and not speaking too loudly. If that be so, she has learnt well the ways of her kinsmen in West Pokot County, from where she comes.

Sendeyo lives in Lomut, a semi-arid region that is prone to the ravages of drought and deadly cattle-rustling. The shyness on this occasion must be magnified by the fact that she is in a totally unfamiliar environment, nearly 600 kilometers from the place she has always called home.

She has just been admitted to a high school that is worlds apart from anything she has ever seen, or even dreamt of ever attending.

Sendeyo does not speak much, but her mind is crystal clear on why she is here: “I’m happy that I’ll get good quality education,” she says. “I know that if I make it, others from my home area will ultimately benefit. The schools in my area do not perform well.”

She is one of the lucky few – 192 boys and girls, to be precise – who have just been admitted to Form One at the M-Pesa Foundation Academy (MFA), a school in its second year of operation that is designed, in form and content, to be a world-class institution.

Everything here is new to Sendeyo, from the sights and sounds to the colourful Queen’s English she is hearing from the academy’s Chief Executive Officer, Mr Les Baillie.

Her mother, Ms Mary Kameon, was nervous about leaving West Pokot to bring her daughter through Nairobi to Thika, where her daughter’s new school is located.

“It was hard for me to come from home. I was shaking when I was called and told to bring my daughter to school. I’ve only heard of some distant place called Nairobi. It was my parish priest who encouraged me to take the journey and bring my daughter here,” says Ms Kameon.

She’s wowed by what she finds after a grueling four-day journey – punctuated by sleepovers and layovers in homes of Good Samaritans and acquaintances – as she made her maiden journey from West Pokot to Nairobi, and then to the academy some 50-odd kilometers northwards.

“I feel very good,” she says. “I was very happy because my daughter would have remained at home and not been able to continue with schooling.”

The school, located just outside of Thika Town in Kiambu County, is perhaps the only one of its kind in sub-Saharan Africa, says the institution’s CEO Les Baillie. The only peer is possibly the African Leadership Institute in South Africa.

“A typical class would be a teacher with lessons loaded on to an iPad and projected through Apple TV. Every student has their own iPad. The teachers use the device to deliver the lesson in an interesting way. We don’t have a teacher standing in front of the class reading out notes and students writing those notes down, but instead it’s much more collaborative,” says Mr Baillie.

They also emphasise Maths and science and there is a club in Form Two with special focus on technology which, Mr Baillie says, is already doing wonders. “After five weeks’ training, they were building and programming robots,” he says.

A typical class would be a teacher with lessons loaded on to an iPad and projected through Apple TV. Every student has their own iPad. The teachers use the technological facility to deliver the lesson in an interesting way. We don’t have a teacher standing in front of the class reading out notes and students writing those notes down, but instead it’s much more collaborative. Les Baillie, M-Pesa Foundation Academy CEO

The students are actively encouraged to research the subject themselves and even challenge the teacher.

“Just because the teacher says something does not make it right. It might just be what the teacher was taught,” says the CEO.

Students work in groups of four or six and even though they write out some of their work, a lot of lessons are submitted online in a system that is designed to encourage “free thinking”.

Every student is issued with an iPad, which is equipped with limited access to the Internet for learning purposes. They have docks where they charge their iPads overnight, since, Mr Baillie says, they are not allowed to take them to the dormitory at night.

The school is a start-up since it admitted the first lot of 92 Form Ones last year.

Mr Baillie says the ultimate goal is to wean the institution off M-Pesa Foundation funding and make it self-sustaining.

They are already approaching individuals or corporates willing to sponsor students and this year, NIC Bank issued a Sh2 million cheque.

In addition, the school is developing a six-and-a-half acre farm in order to grow its own food.

“We now have vegetables, chicken, rabbits… and very soon we will have cows. By this time next year we will be totally self-sufficient in milk, eggs, yoghurt, vegetables, and fruits. We plan to produce more than we can consume. The farm, for us, is a revenue generator as well,” says Baillie.

The self-sufficiency and all-round capabilities they are building as an institution are, in a sense, the same values they are working to inculcate in the young minds who pass through their classrooms.

“Passing their exams and going on to get one or two degrees does not actually mean that they will be useful to society and business,” says Baillie. “We also try to teach them entrepreneurship; how businesses work. We are also trying to build leaders.We have been able to model ourselves to a certain extent on the African Leadership Academy, whose leaders have given us a lot of guidance.”

Poverty, he says, rules the roost, and Sendeyo and her 192 new schoolmates – four from each county – must count their blessings for the opportunity to go, literally, from rags to riches.

“Their homes are small huts or sheds, most of them dilapidated. It’s a place they live more for companionship and family bonds but not a home in the sense of a text book. They have to walk long distances looking for water, food or education. That is the kind of life some of those who have been admitted here have to go through,” says Father Patrick Murunga, the Lomut Catholic Parish priest who assisted Sendeyo apply. “It must be a (culture) shock coming here.”

I’m happy that I’ll get good quality education. I know that if I make it, others from my home area will ultimately benefit. The schools in my area do not perform well. Christabel Sendeyo, one of the lucky few – 192 boys and girls – who joined to Form One at the M-Pesa Foundation Academy.

Baillie and his team are only too well aware about the culture shock and even the possibilities that the teenagers’ way of lives might be changed so much that the intention of uplifting communities in future is lost.

“We have to give them two adjustments,” he explains. “We have two or three weeks where we try to integrate them into the school. The other transition is that we insist that they go home at the end of the term.”

While on their term break, the students have to do some project in their communities, “whether it’s a children’s home or something else.”

“And when they return for the next term they have to write about it, and it’s scored. We teach them life values as well and I’m very proud of that,” says Baillie.

To admit students to the school, the M-Pesa Foundation team goes beyond KCPE performance to look at potential in talent such as leadership and entrepreneurship skills, or such other disciplines as music and the arts.

“Then we formally interview them in each county and visit them in their homes as well,” says Baillie. “The other criterion is that they have to come from economically challenged backgrounds because we cater for all their needs here.”

Right place. Right time: the making of a lunchtime hero

Girls who want to save their school from jumbos