Along with our medal-hauling athletes and the urban folklore of matatu art, let us celebrate M-Pesa@10 as a core part of Kenyan culture

There is one thing that we must never forget about M-PESA; this mobile money transfer application was founded on native intelligence. With the spread of mobile phone services in the opening years of this millennium, Kenyans quickly discovered that they could use airtime as a medium of exchange. By 2005, a new practice emerged; you would text your aunt in the village the 16 digits of an airtime refill scratch card and she would go to the local shop and cash that airtime for flour or money, less a few shillings for the shop owner’s commission.

The immediacy of modern telecommunications was key to the success of this locally modified transfer of cash. But the other key factor that fueled these kinds of transactions was the structure of the modern Kenyan family – its intimacy. Our families remain tied to a traditional life of communal endowed with expansive economies of affection. For better or for worse, these economies of affection mean that you are your brother’s keeper; your aunt’s anchor; your cousin’s micro-credit provider; your neighbour’s medical insurance; your mother’s retirement strategy; and your colleague’s funeral plan. Cashing airtime for flour at the local kiosk provided rapid means by which Kenyans could fulfill all these para-familial expectations and obligations. In short, our kinship bonds built M-PESA and, in turn, M-PESA had the potential to strengthen our kinship bonds. 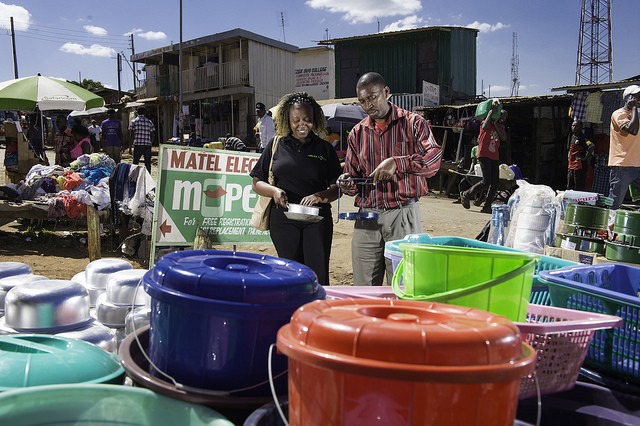 Today, M-PESA stands as one of the great Kenyan traditions of the millennium. But traditions, as we now know, are not a fixed and frozen set of rules to be found in unchanged caves and villages, far away from tarmac roads and electricity. Traditions are invented every day. They are hybrid, panel-beaten revisions of things from the past mixed with inventions from many elsewheres. As its hybrid name – half-English (M for mobile), half-Kiswahili (pesa for money) — suggests, M-Pesa is the story of our modernity, but at the same time it is the story of how we sustain the ethnic practices that some call “our traditions”. When the cell phone came along, we found both incremental and transformational value in it. It helped us to do what we have always done, with greater speed and efficiency, and we also coined entirely new practices around it.

Over the last 10 years, M-PESA’s trajectory from being a service to becoming a culture is witnessed in its growth from being a noun to becoming a verb; an active doing word that is entrenched in our everyday practices. Regardless of the mobile money app that one is registered on, “I will M-Pesa you” and “Please M-Pesa me” are words that Kenyans use a thousand times over, every single day. To say that you have “M-Pesad” someone is not a misuse of the term, but an affirmation that you belong to the club of efficient Kenyans who do not waste time queuing at the bank, idling at utility counters, or pacing on the street waiting for change and selfishly detaining vendors who have other customers to serve.

As its hybrid name – half-English (M for mobile), half-Kiswahili (pesa for money) — suggests, M-Pesa is the story of our modernity, but at the same time it is the story of how we sustain the ethnic practices that some call “our traditions”. When the cell phone came along, we found both incremental and transformational value in it. It helped us to do what we have always done, with greater speed and efficiency, and we also coined entirely new practices around it. Dr Joyce Nyairo

The nifty culture of M-PESA is fueled by a range of expressions. Such expressions serve practical purposes, but with time they also become sources of creativity and comic wit. For instance, a person who walks up to an M-PESA agent and simply says “naeza toa?” risks the playful response, “nguo, ama?” Jokes of this kind fill our social media accounts and turn bleak days into light-hearted ones, thanks to the lingo and social mores of M-PESA.

Among our newly minted idioms — which feature ironies and absurdities such as “wacha niende nirudi”, “I am in a small meeting” and “niko kwa jam na-come” — there is the delightful M-PESA-derived adage, “tuma na ya kutoa”. It is functional, and it is diversionary. We use it to articulate our business smarts — why should I pay the withdrawal charges to access money that the sender owes me? We use it to demand fair play from others. But there are also times when we say “tuma na ya kutoa” just to see if we can squeeze a little windfall from a friend. In our deliberate cheekiness, we are careful to soften the possibility of rejection with a self-deprecating laugh.

With M-PESA, old words acquire new meanings. Our (gendered) practices of social welfare and patronage are quickly written into these new meanings. When Safaricom formalised the airtime-sharing service known as Sambaza, it was responding to these Kenyan networks of giving.  Therefore, the “buy airtime” option on M-PESA comes with the choice “other phone”. That option exists because many subscribers fund the running costs of other cell phone users. This is not limited to employers who meet the communication costs of their staff. At a social level, we receive airtime from a wide cast of relatives — parents, off-spring, cousins, and so on.

Not surprisingly, Sambaza joined the armory of admirers who learnt how to court through liberal gifts of airtime. Soon, “haki babe si you sambaza me” entered the idioms of Kenyan romance. As M-PESA transfers airtime and cash, it simultaneously transfers emotions –desire, hope, love. Today, romantic relationships are transacted and measured in the currency of cell phones and nothing demonstrates how love-struck an admirer is more than the frequency and ease with which she — but mostly he — sambazas airtime. Put simply, M-PESA nurtures love.

If M-PESA has given us new ways of expressing our love, it has also given us a new kind of thief. Crime in the time of mobile telephony takes many forms, from kidnappers who use M-PESA to collect their ransom, to fake M-PESA messages followed by desperate calls pleading for a refund of money that was “erroneously” sent, to calls from fake Safaricom employees who request your SIM card PIN only to effect a SIM card swap and wipe out your M-PESA account, there is no shortage in the ingenuity of cell phone con-artists. Consequently, a whole new literature of cautionary tales is generated daily by victims and well-meaning narrators who use the adage, “forewarned is forearmed” to inform fellow Kenyans of emerging trends in M-PESA crime. Fortunately, service providers and law enforcement officers are tireless in devising new ways to disrupt criminal networks.

As M-PESA transfers airtime and cash, it simultaneously transfers emotions –desire, hope, love. Today, romantic relationships are transacted and measured in the currency of cell phones and nothing demonstrates how love-struck an admirer is more than the frequency and ease with which she — but mostly he — sambazas airtime. Put simply, M-PESA nurtures love. Dr Joyce Nyairo

M-PESA is often referred to as a disruptor. It reconfigured the banking industry. It created new products such as the M-Shwari savings and loan scheme. Its Paybills reconfigured our cultural rites and norms. If the size of the gathering at funeral matangas, weddings, medical appeals and graduation parties has shrunk, it is because M-PESA takes the place of many invited guests. It demonstrates that you care but it frees you, at a physical level, to attend to other matters.

Sometimes, the physicality of M-PESA is a disruptor, an unwelcome disorder in our lives. Think of the supermarket shopper who uses M-PESA to pay for her goods, only to be forced to hand over her phone to the agent at the till to verify the payment. At that exact moment when the agent is holding her phone, an amorous or graphic SMS registers on the screen. Ouch! The shopper’s visible embarrassment might be celebrated by the irritated shoppers behind her. Their time has been unduly consumed on the queue by this “Buy Goods and Services” option which entails an invasive ritual of sharing your phone with a stranger. 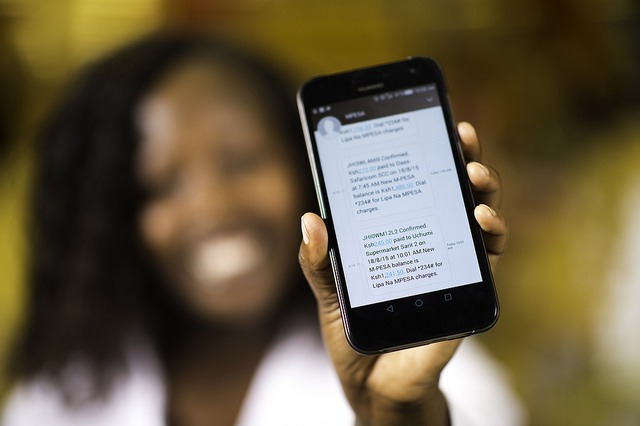 The range of M-PESA services – deposit, withdrawal, bill payment, international remittance and microcredit provision – free up our money, our time and our minds. Families make significant savings because the cost of transport has been taken out of the equation of taking money to relatives who live in a different part of the country. But in the absence of face to face meetings at home, might M-PESA dilute our bonds, reduce them to financial dealings that are devoid of the exchange of warm hugs at prolonged, garrulous assemblies?

Still, M-PESA is the embodiment of freedom and there are many ways in which it can renew our national culture. Its capacity to cut down corruption by intervening in spaces where face to face cash transactions are the norm is a corporate and public service strategy that we must exploit to the highest levels. Our roads should be a lot more decongested than they are since we no longer spend time traveling to deliver cash. The man-hours that are freed when we bypass such tedium are re-apportioned between work and leisure. Consequently, M-PESA spurs economic enterprise, reduces stress and promotes a better work-life balance. Indeed, the immediacy and the malleability of M-PESA has reinvigorated us, as a people.

So along with our medal-hauling athletes and the urban folklore of matatu art, let us celebrate M-Pesa@10 as a core part of Kenyan culture. Not because cell phones ever featured in the lives of our ancestors, but because we infused the giving and sharing spirit of our forefathers and grandmothers into a modern platform of communication. We reconfigured new digital spaces with age-old practices that allow us to perform our love, to live up to our obligations, to coin new idioms, to exchange value(s), and to build our industries.

Dr Nyairo is the author of Kenya@50: Trends, Identities and the Politics of Belonging (2015) which features a chapter entitled, “Okoa Jahazi: Love and Crime in the Time of Mobile Telephony”.