You can sense the mixture of pride, joy and tension when Phineas Kimathi starts talking about the Safari Rally.

The pride and joy come from the fact that after 19 years, the Safari Rally is back on the World Rally Championship circuit, which is a great moment for the country and the motorsports fraternity in particular.

The tension comes from his role as the Chief Executive Officer of WRC Safari Rally Kenya, which means he is in charge of ensuring that the show is ran to perfection and every stakeholder goes home happy.

There is a tinge of something else when he starts to speak about three young men who have been handed a chance and a responsibility by the International Automobile Federation (FIA) under the Rally Star programme, a global talent detection programme organized by the FIA and its clubs.

McRae Kimathi, Jeremy Wahome and Hamza Anwar, were unveiled to the public on June 15. While there are 34 Kenyan drivers in the rally, Phineas and other officials will keep a keen eye on the trio as they represent the next generation of drivers.

“We want to guarantee the future of this event by bringing in young people,” said Phineas when he first introduced the trio.

The FIA had a stringent set of conditions for those nominated for the programme, but the most important was that they had to be under 27 and, quite naturally, come from a background of rallying or related disciplines.

And they all fit the bill. 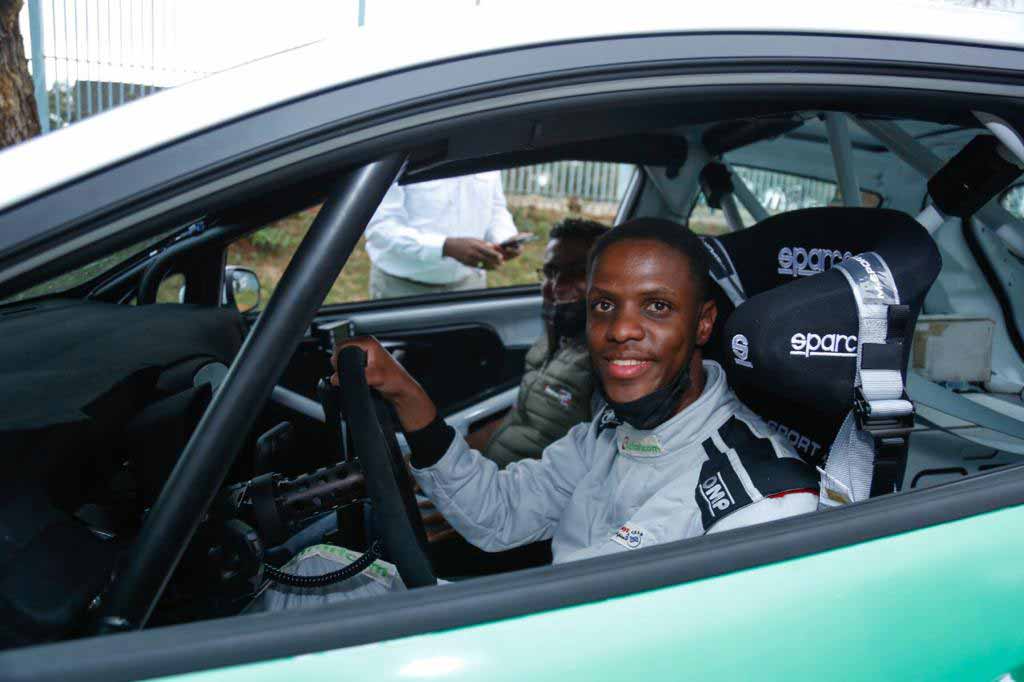 When your father is a Kenyan racing legend and you are named after a driver who held the record for the most wins in the WRC series, you will naturally be challenged to make an impact in the sport.

“I used to watch my dad when he used to race when I was younger. So all the time, when he used to go to race, I used to tag along to come and watch him. So the sport grew with me from a young tender age,” he says.

He started his racing career in 2015, and failed to finish the first six events he took part in, four times by crashing out. While a rally car crash can be entertaining for spectators, and the crew is kept safe by the roll cage, seat belts, and other features, the car often has to be rebuilt, which comes at a great cost.

For Kimathi, this meant there were tough conversations with his father, Phineas, and a lot of reflection on his part.

“Once you have one, two, three accidents, you start to calm down a bit and ask yourself, ‘Okay, what exactly am I doing wrong? Is it my approach? or ‘How can I better my thinking, even my mentality on how to tackle an event?” he says.

Kimathi reckons that from this experience over the past seven years, he has emerged a more mature and ready driver with the hot bloodedness and the Invincibility Complex  that comes with youth faded away, and he now approaches racing differently.

There has been proof of that progress, as he was the youngest finisher at the Safari Rally 2019 WRC Candidate Event and is currently a Division One driver and is leading the championship.

“Depending on the last two, three years, I’ve actually made my craft to be where exactly I am today,” he says.

He sees the upcoming rally as a seven-day event rather than the four days of actual racing there is going to be.

There was a parallel with his father’s career when he finished eighth in the Equator Rally this year, like his father did in 2001.

As he prepares for the left-hand drive Ford Fiesta, which he has not done before, Kimathi is confident about his ability and maturity and will not put too much pressure on himself.

“For this rally, I want to go, have fun, enjoy myself first and foremost, but also I want to finish in a respectable position,” he says. 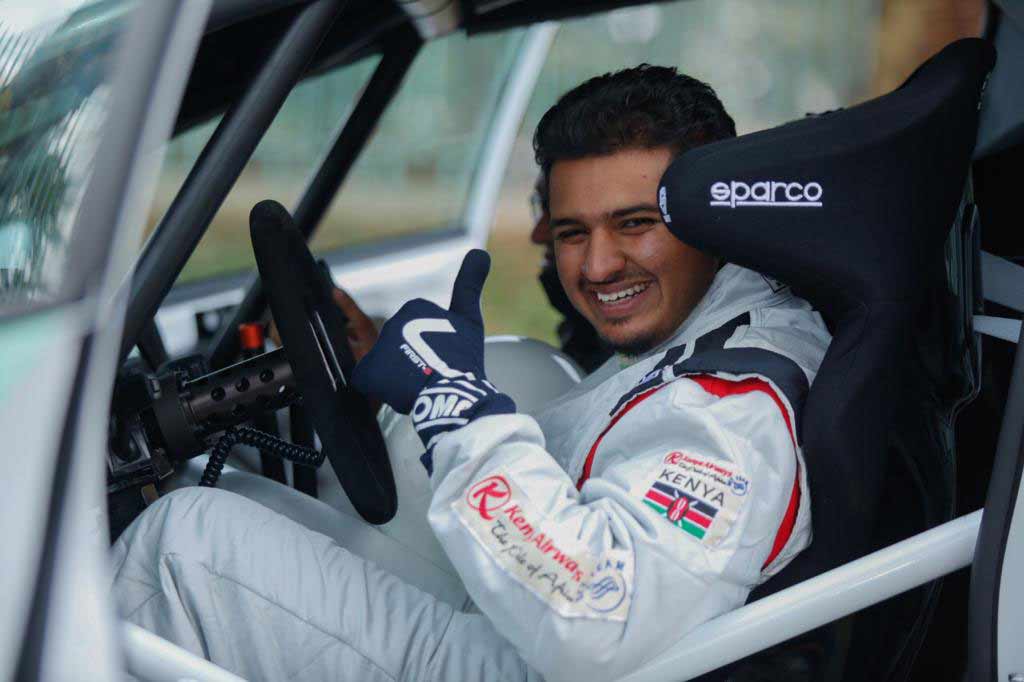 From the start, Hamza Anwar will tell you that he is the quickest upcoming driver in Kenya, and he has the facts to back his claim.

He was fifth at the 2021 Equator Rally and fourth at the Arusha Guru Nanak Rally in 2020 and of the total six races he has started in his career, has only failed to finish once.

Although he comes from the Anwar family, with his father and his uncle Azar Anwar already established in the rallying world, Hamza only got in the seat of a rally car at 17, mainly because he had been studying abroad.

He had by that time been driving for more than a decade, having started with an automatic at five and then a manual at eight. He would later put together some resources and start in autocross by putting together a buggy and then later a two-wheel rally car.

Schooling abroad meant he had to set aside his rallying ambitions and only resume when he returned to Kenya in 2020.

Throughout, the Anwar name loomed large in the background.

“Being Anwar, the pressure is always there but I’ve always been mentored and groomed into thinking forward,” he says.

His uncle, Azar Anwar, a multiple Kenyan champion, has also been at hand to guide him, and he has taken strategy and consistency from him and speed from his father.

Growing up in a rallying family also means that he is surrounded by the images and stories of legends like Colin McRae, Mika Hakkinen, Carlos Sainz internationally and the local heroes like Patrick Njiru, Joginder Singh, Phineas Kimathi, and Ian Duncan.

“Whatever you hear in the sport, you kind of take it in. It’s knowledge. Everything you hear, anything a driver tells you, especially the older generation, because they have gone through everything before you,” he says.

When he was informed that the Ford Fiesta he will drive is a left-hand drive, Hamza was not scared as he had enough experience in that position driving a vehicle on a job to Turkana.

To prepare for the rally, Hamza has had to do things for his mind as well as his body, reading, doing research, watching what he eats – the hardest part – and working on his fitness.

He has taken time off his job building and operating camps in remote areas to concentrate on the preparations.

“I’m just building up to the event. So my diet has to be A1, my fitness has to be A1, and that really helps with the mindset. I just keep myself in a cool environment. I meditate at night and in the morning. So yeah, it’s by the minute at the moment. There’s always blunders and flaws, but I’m keeping it cool,” he says. 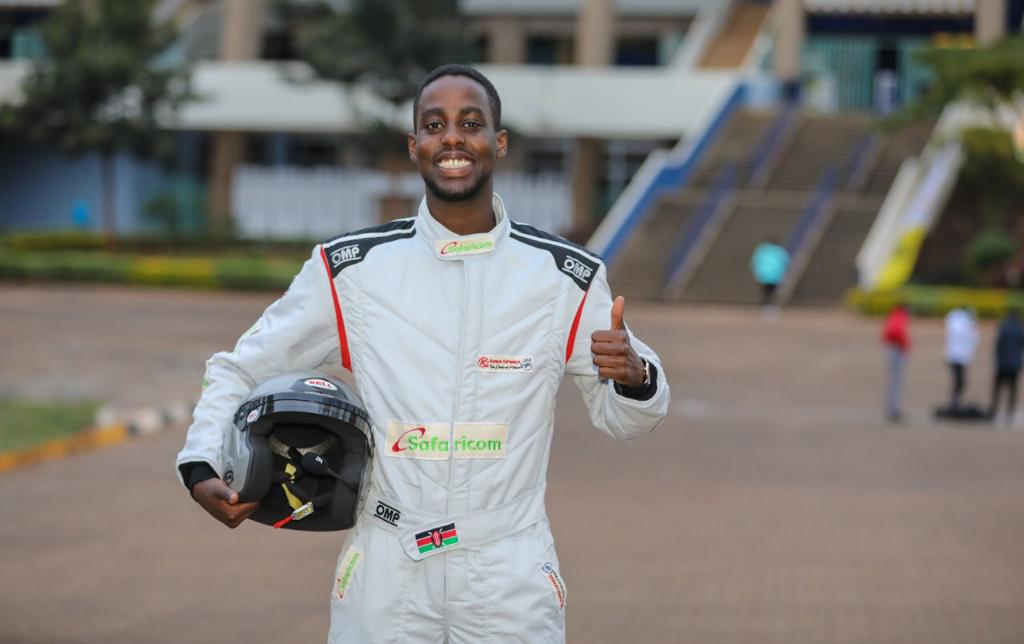 November 2, 2008: A young man is on the track at the Rift Valley Motor and Sports Club, winning his go-karting race, but nobody seems to care.

When he emerges from the track and inquires about the source of the cheering and clapping, Jeremy Wahome finds the crowd fixated on a young black British man who has just won his first Formula One race at the Brazilian Grand Prix.

That’s how Jeremy met Lewis Hamilton, the man he wants to become.

“From then on, I started watching Formula One and that’s what I was exposed to. So growing up, that’s what I had in mind. It was always my ultimate ambition,” he says.

Unlike his colleagues in the FIA Rally Star, Jeremy was into Formula One rather than rallying, and that’s the sport he has pursued, with his father, Anthony Wahome, his main financier and biggest supporter.

From go-karting, the ladder to Formula One starts with Formula Four and then up through Formula Three, Formula Two and ultimately to the premier race.

He started with Formula Four spec, then called Formula BMW, in Malaysia, in 2015 but then only ran one race and then had to move to the United Kingdom for his studies. He finished on the podium thrice that weekend and was ranked best rookie in all three races.

The business of driving fast cars is expensive and his father has spent a small fortune over the years, betting that the young man will one day make it big, which comes with endorsements and sponsorships.

Jeremy hasn’t taken part in a full championship since 2018 and came back to Kenya in 2020 when Covid-19 forced nearly everything to shut down.

His selection as one of the three Kenyan drivers is now the next door that has opened for the deeply religious young man.

Jeremy is primed for the transition to new things, having never driven a rally car before or been in a car with a navigator in his ear all along.

“So from that point of view, I’m interested to see how I can transfer the skills I’ve learned from formula to rallying and then just see how it goes. The Safari Rally will be my first opportunity at that,” he says.

He hopes that he will be the best rookie just like he has done before, and he will then see whether more doors will open for him.

How Safaricom’s new kid on the block is simplifying payments

Are you productive in pyjamas?