International Literacy Day: A man’s determination to go back to class after 22 years

Every day at 7a.m, Patrick Muriithi sits in class, ready to start his day at Ngong Open Learning Secondary School.

By 6p.m, after a full day of learning, he is ready to start working at Karen Hospital, where he is a laundry attendant.

“I dropped out of school in 1999. After class 8, I couldn’t go on because my parents had many challenges. I came to Nairobi and got work here. But I now want to continue from where I left,” he says.

Patrick is among adult learners in Kenya who wish to augment their skills and abilities by enrolling in school. His biggest reason is to learn how to speak English, which he believes will make him competitive at work.

“I interact with many people of different backgrounds at my work place. Many of them communicate in English. I want to learn how to speak English and that means I have to do well in school which will help me get a promotion at work. If I don’t, I won’t progress in life. That’s why I came to this school, to better my life,” he says (in Kiswahili).

Class is in session: Patrick reports to school every day in the morning after working night shifts at Karen Hospital as a laundry attendant.

However, it has not been an easy journey for Patrick. He’s had to sacrifice time with his family – his wife and two children – to juggle between school and work. His spare time is spent studying and trying to catch up with his classmates. But no matter how demanding it is, Patrick says he has to do it because “life is hard, especially without an education.”

Those excluded from the education system at an early age, the report states, remain disadvantaged for the rest of their lives.

Patrick is the oldest in his class, this, however, has not stopped him from making friends with his younger classmates.

“I don’t focus on my age, what I want is to study. I dream of becoming a businessman and continuing with school. Business requires you to have an education,” he says.

His teachers and friends are always willing to help, and his family has been supportive of his decision.

“When I told my mother that I wanted to go back to school, she was overjoyed, especially since she couldn’t put me through school back then. She said she would help me in any way she can,” Patrick says with a smile. He adds, “My wife is so proud of me and appreciates my effort.”

Not everyone is happy with his decision, though, as there have been those who think schooling at his age is a waste of time, that he should have started a business or taken up a vocational course.

Those negative sentiments are like water off a duck’s back to Patrick.

“I want to seek knowledge first, get the basics, then I can do all those other things. I’ve had conversations with people who think I look like I finished school and that I fit in with people who did, but I know there’s something I lack and that’s why I’m back in school.

“I got married in 2017, which is not that long ago, and there are people who say I’m not spending enough time with my wife. But all that matters is that we had a discussion with her and agreed that’s is better for me to go back to school,” he adds.

Every year, thousands of pupils miss out on secondary school admission, and the major barrier hindering their transition to high school is lack of school fees.

Adult Education Concern, established in 2007, is a non-governmental organization (NGO) which runs the Ngong Open Learning Secondary School, has been instrumental in giving a second chance to those who dropped out and couldn’t proceed to secondary school. 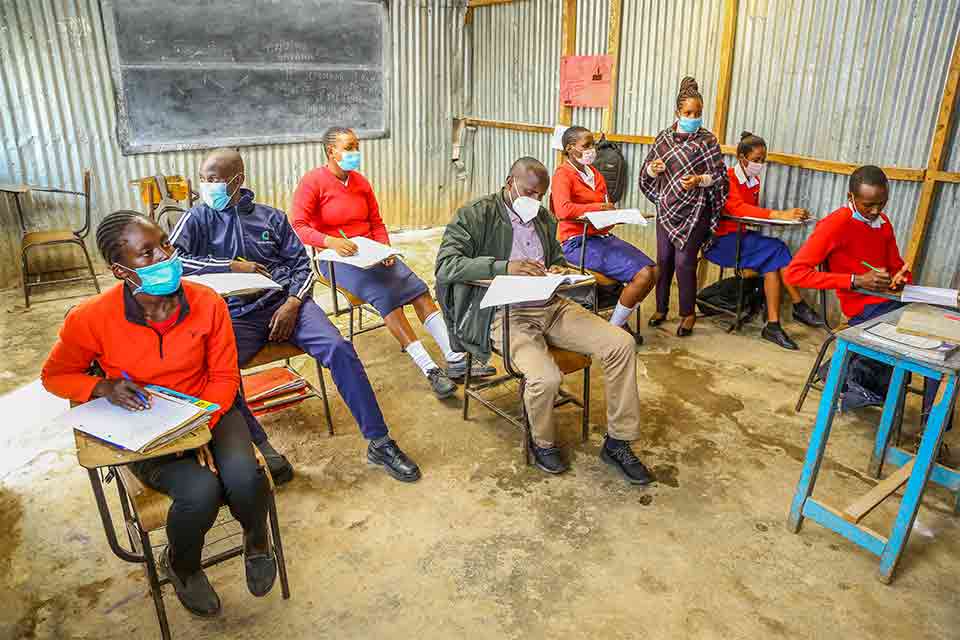 Adult Education Concern has been expanding access to secondary school education to marginalized individuals who range from street children, refugees, house helps, single mothers to women/girls who ran away from home to avoid forced marriages and female genital mutilation (FGM.

The students sit for the national Kenya Certificate of Secondary Education (KCSE) exams, but for the adult learners, the teaching and learning approach is different. Given the various obligations and responsibilities with the learners, they are allowed to take a crash program depending on their learning ability.

Additionally, the learners are encouraged to apply for bursaries from National Government Constituencies Development Fund) (NG-CDF to offset the KSh 8,000 fees per term as the students come from financially disadvantaged backgrounds The institution provides textbooks for the learners. The biggest challenge to the institution, in its bid to give adult students dignity and a right to literacy, regardless of their background, is funding.

“This is an institution where most of the teachers are paid by the institution. So, it means students need to chip in, and that is a challenge for students who dropped out of school because of challenges like school fees,” says Mr Charles Kingori Murigu, the Director of Adult Education Concern.

Well-wishers have been stepping in to contribute towards school fees to prevent the students from dropping out again.

Another challenge is lack of modern facilities, however, the institution that has since enrolled more than 2, 000 students since it opened its doors, has been lucky to get donations from various organizations including the Safaricom Foundation.

Through the Foundation’s programme, Ndoto Zetu, the school has benefitted with books worth over KES3 million.

Ndoto Zetu is an initiative that focuses on partnering with Kenyans to help implement community projects in health, education and economic empowerment, to make ordinary mwananchi’s dreams come true.

In education, Ndoto Zetu, has handed over 262 projects benefiting 134,048 people and in health, 68 projects have been handed, impacting 123,378 beneficiaries.

Patrick, being among the beneficiaries, is hopeful of a bright future now that he has received a second chance at getting an education.

“I want to study up to Form Four and after that I’ll see what next. That’s the plan,” he says.

Patrick’s story is part of the global celebrations to mark International Literacy Day (September 8). This year the date explored how literacy can contribute to building a solid foundation for a human-centered recovery, with a special focus on the interplay of literacy and digital skills required by non-literate youth and adults. The day also explored what makes technology-enabled literacy learning inclusive and meaningful to leave no one behind.

Can women really have it all?

What to watch on Showmax East Africa