How we took fibre to the Cradle of Mankind: Part II

What does it take to connect a region to high-speed internet? Safaricom’s multi-departmental team of engineers and technicians, including Andrew Njeru, Kepha Atika, Joseph Kagucia, and Francis Bondo take us on their journey into the heart of Turkana to bring high-speed internet connection and high-quality voice calls. Fasten up, you are in for an expedition.

On a cold, windy and dusty morning on the shores of Lake Turkana, in 1984, Kamoya Kimeu discovered a skeleton. It was that of a young boy probably around 9 to 12 years old at the time he died and estimated to be about 1.6 meters tall. The skeleton was 1.6 million years old, as Kimeu would later discover through research to date the bones.

Kimeu—an archeologist—named the skeleton Nariokotome Boy, borrowed from the Turkana local dialect. If that is hard for you to pronounce, you can just call him by his popular name, Turkana Boy. Many years later, the skeleton has provided much information about growth, development, and body proportions of an early member of the homo erectus species.

Before you get spooked with the skeleton story, here is some context. Kimeu was a researcher working with Dr Richard Leakey, a renowned Kenyan anthropologist and conservationist. They were digging up fossils related to human evolution. Turkana Boy is undoubtedly one of the most famous events to have happened in Turkana.

It is the only almost complete skeleton of a human-related fossil ever found in the world. For this reason, Turkana region is often referred as the Cradle of Humankind.

But, the Cradle of Humankind was frozen in a time capsule. While the other parts of Kenya were enjoying high-speed internet connection and high-quality voice calls, this Northwestern part of the country was missing out. Calls were accompanied by a crackling distracting background sound, the reception was so poor that a video that would take seconds to load and play in Nairobi would take close to five minutes in Turkana.

This directly hampered efficiency in modern communications and slowed down lots of plans for progress and economic development in the area.

Thirty-four years after the discovery of Turkana Boy, the region has seen at least 250 million barrels of oil discovered in 2012 and underground water in 2013. Fibre connection in 2020 could easily pass as the next big thing in the region.

With the global ban on flights due to the COVID-19 pandemic, it meant that the option to access Turkana by flight to Lodwar, the capital or via Lokichogio was crossed out.

The team of about 20 personnel from three departments—consisting of the transmission planning, backbone support, regional support, field engineers and drivers—set off on road. At this time the government had also issued a curfew on travel and movement. But, like a silver-lining, this enabled the team to work on sites along the road as they travelled.

With 554 kilometres ahead of them, they braced for the journey. Some stretches of the road were bumpy and rugged and brought on motion sickness. Their brief was to light up the fibre that had just been built. A team had preceded the team, they laid the critical foundation needed to get Turkana connected, to ensure a smooth and seamless delivery.

Andrew Njeru, the Principal Transmission Planning Engineer, said: “Our task was to improve the existing network. To make it more efficient to serve the growing needs of the region. If I was to put it in in another way, we were going to transform the network from a single road into a super-highway. This would come with super speeds, access to 4G network and a much better user experience.”

Some of the immediate beneficiaries of the change would be the Turkana County Government, institutions, and entities including the Kakuma Refugee Camp that is home to over 200,000 refugees.
The team set off from Nairobi part of their luggage masks and sanitizer as they were working during a pandemic. Their first stop was Lanet in Nakuru where the equipment preparation and internal cabling was done. After a few days, they set sail for Kitale on June 17, arriving at the sleepy town rugged and tired.

It was meant to be a short night, with plans to leave before the first rooster crows, as they had a long day waiting in a few hours. Once up, the team had breakfast and got into a brief meeting where they agreed on final logistics. They split into two groups, one assigned to work on Kitale and Kapenguria sites while the second allocated the Kainuk and Turkwel sites. 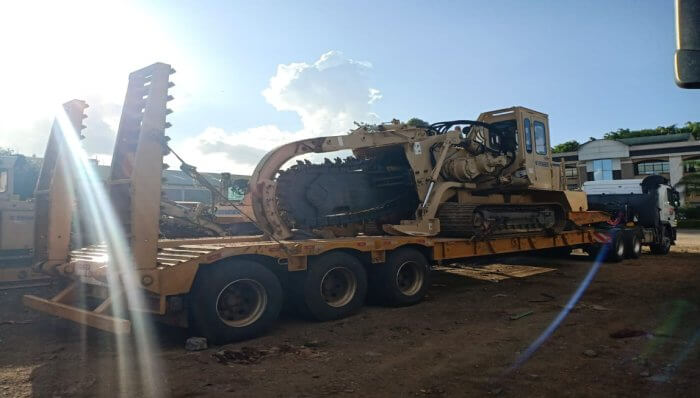 Two days later, with loads of work under their belt, we were ready to push further North towards Lodwar for the next part of their ‘fibre-connection expedition’.

“Our assignment on this day, which I remember to have been a Saturday, was to work on the Kainuk – Lokichar – Lodwar link. The trip to Lodwar was quite memorable. A section of around 40 kilometers was full of holes, some as big as craters, that reminded me of my Geography class,” recalls Kepha Atika, Senior Manager in the Digital Network Operations Centre.

Driving on it was like a dance—with jerks and bumps—only that it was not the most comfortable tune, not to the ears nor the body.

They arrived in the hot sweltering town and worked on the Lodwar – Lokichar link up to 7.30p.m when they called it a day. Sunday disappeared as quickly as it had come, preoccupied with cleaning up some issues on the link left off from the previous day. On Monday they shuttled between Murua Nachok—atop a hill—and the Kakuma site.

“Given how steep Murua Nachok was, it felts as if all the food we ate on the day was spent as we went up and down,” said Francis Bondo, a Transmission Support Engineer. Tuesday, however, was not the easiest as some contractors were not so keen to get their heads in the game. Partly due to fatigue, nonetheless, they huffed and puffed and got the work done.

With the finish-line nigh, Wednesday started off in high spirits. The task was Service Loading using the access ring between Lodwar – Luterere – Lokichar and the backbone link between Lokichar and Kapenguria as they continued working on the Lokichar – Lodwar link.

And just like that, without any fanfare or ceremonies, the team transformed Turkana!

“People in Turkana will now enjoy high quality voice services and high-speed internet. This will open opportunities for better e-learning, working from home, telemedicine and many other possibilities,” said Joseph Kagucia, a Transmission Planning Engineer.

Peter Ngigi Njehia, Turkana Area Sales Manager: “This completely transformed the customer experience. Everyone in Turkana, residents and all will benefit from the new connection. We used to have downtime especially when it rained, and this would persist for over two days. But this has completely changed. No more call drops, calls are seamless, and people can browse without buffering. This has truly helped everyone.”

Peter added: “I appreciate the technology team for their dedication, support and response to help connect our region. You have made my work in the region easier and better to serve our customers.”
Link to part I here