Over the last decade the mobile phone has steadily worked its way towards replacing the post office, the library, the music boom box, the weather channel, the wristwatch, the movie store, and a variety of tasks that used to take a sizeable amount of time.

The digital revolution is unfolding, courtesy of connection to the internet, but for only half of the world, according to statistics from the United Nations Development Programme.

Today, more than four billion people still do not have access to the internet, and an overwhelming 90 per cent of these digital have-nots are from the developing world.

“Bridging this digital divide is crucial to ensure equal access to information and knowledge, as well as foster innovation and entrepreneurship,” says the United Nations.

In Kenya, only 40 per cent of the 55.2 million mobile phone customers own smartphones. The rest, about 33 million, own feature phones, and are locked out of the world of possibilities that the digital haves can access.

The need was evident when Safaricom ran the third edition of the Maisha ni Digital campaign in 2019. The campaign sought to make smartphones accessible to more customers, and more than one million customers snapped up the devices priced at between KSh3,499 and KSh5,999.

The latest campaign, dubbed Lipa Mdogo Mdogo, takes this effort further by giving customers a wider range of phones to choose from and the ability to pay for the phones at KSh20 per day. A first in Kenya and is one of the promises made under the promise to be “Simple, Transparent, Open” to customers. 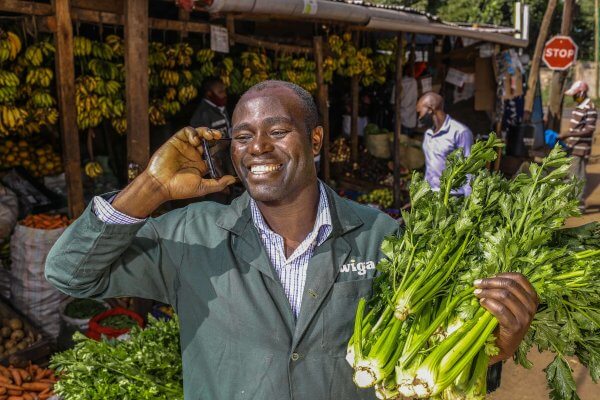 At Gem Lane Groceries, customers can order groceries through WhatsApp and have them delivered to their homes.

A customer’s credit score, a rating of their ability to pay back based on their transaction history, will be considered.

To get access, a customer will need to dial *544# accept the terms and conditions, and they will then receive a text message on their eligibility and the value of the device they can purchase.

Customers will also need a history with Safaricom going back at least one year and be between the ages of 18 and 75. Those who make consistent payments for seven days will receive 100MB free YouTube bundles.

The Lipa Mdogo Mdogo smartphone penetration campaign has been designed in partnership with Google and the target is to enable one million more customers to upgrade to 4G.

With the Covid-19 pandemic forcing people to spend more time at home, the internet has become a necessity for many, and usage has gone up.

“A smartphone device is critical in supporting the new realities brought about by COVID-19. This proposition aims to support Kenyans during and beyond this pandemic by enabling them access more opportunities; be it learning, working, or running businesses from the comfort of their homes,” said Peter Ndegwa, the Chief Executive Officer at Safaricom.

Mariama Abdullahi, the Director for Android and Platform Partnerships for Africa at Google, explained that Android’s goal has always been to bring computing power to everyone.

She added: “Access to the opportunities the Internet offers is critical for any nation’s economic growth and social inclusion. Most Kenyans and Africans at large access the Internet via mobile broadband.”

Thanks to the initiative, the “Neon Ray Pro”, a 4G Android (Go edition) smartphone that originally retails for Ksh 6,500, can now be purchased by making a down payment of Ksh 1000 and subsequently a daily payment of Ksh. 20. This flexible payment plan represents an 85% reduction in the upfront cost and is significant for a large segment of the population that earns their wages daily. 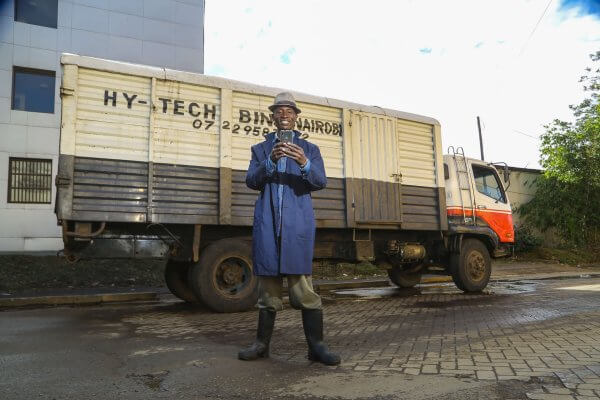 Evans Bundi, a garbage collector in Nairobi who accesses Google Maps on his smartphone to avoid roads with traffic jam.

The research by the UNDP had also established that device and data affordability were cited as the key barriers to people going online.

“We believe that this collaboration with Safaricom will bring more Kenyans access and the means to partake in the opportunities that exist online,” said Abdullahi.

As part of the partnership, Google set up three teams across different time zones across the world to work around the clock to fast track delivery of the solution while in Nairobi, a strong team of over 70 Safaricom staff were responsible in bringing this project to life. 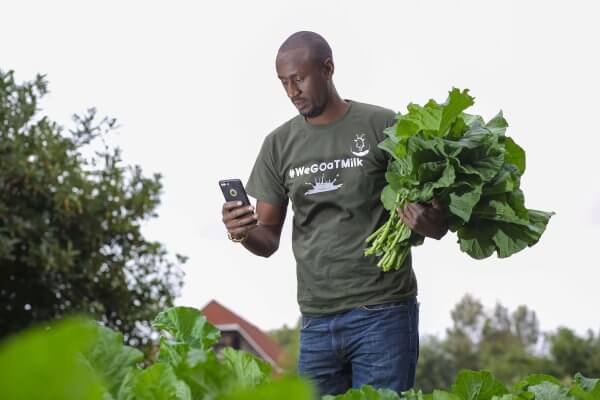 Caleb Karuga, a small scale farmer who uses his smartphone to skill himself and get a market for his produce.

With the need to reduce social interactions to limit the spread of the coronavirus, for example, businesses that depend on the internet to connect to customers have seen an increase in demand.

Someone without a smartphone would not know that these opportunities exist and would perhaps be at a greater risk than if they had the means to reduce the need to interact with other people.

There is an evident need for more access to the internet in Sub-Saharan Africa as according to the GSMA, only 23 per cent of the population in this region has regular mobile internet access.

There has been some good progress on this front, however, as the number of mobile subscribers in the region increased by 20 million in 2019, the GSMA reports.

According to the GSMA, mobile technologies and services generated 8.6 per cent of GDP in sub-Saharan Africa, which amounted to over $144 billion of economic value added in 2018.

The mobile ecosystem also supported almost 3.5 million jobs (directly and indirectly) and made a substantial contribution to the funding of the public sector, with nearly $15.6 billion raised through taxation.

With Safaricom investing about $300 million every year for the last decade to support the government’s ICT advancement policies and plans and to help bridge the digital divide, the company is prepared to enable more of its customers to access information.

More of Safaricom’s customers can now access the internet as the company had by March 2020 attained 77 per cent 4G coverage, 94 per cent 3G coverage, and 96 per cent 2G coverage. 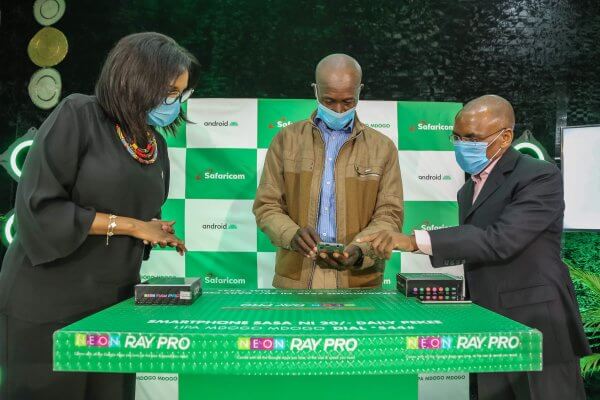 “The Lipa Mdogo Mdogo campaign is expected to add to these efforts and will by no means be the last,” said Mr Ndegwa. “We have to keep innovating products and services that will answer to the customer needs to truly become part of the global digital revolution and position themselves to reap the socio-economic benefits.”

They were in class but they were not learning. This partnership is working to change that