Go-getter with albinism conquers the world of business and advocacy

Jerita Mutisya Mutinda is an accomplished businesswoman with albinism who actively champions for the rights of People With Albinism.

For more than two decades, Jerita Mutisya Mutinda has been a prolific businesswoman and a serial entrepreneur.

Her first venture was Machakos Superstar Beauty Parlour, where for 10 years, she sold clothes and beauty products. She later opened a cereals shop that she still runs to date at the Machakos food and groceries market, popularly known as Sokoni. 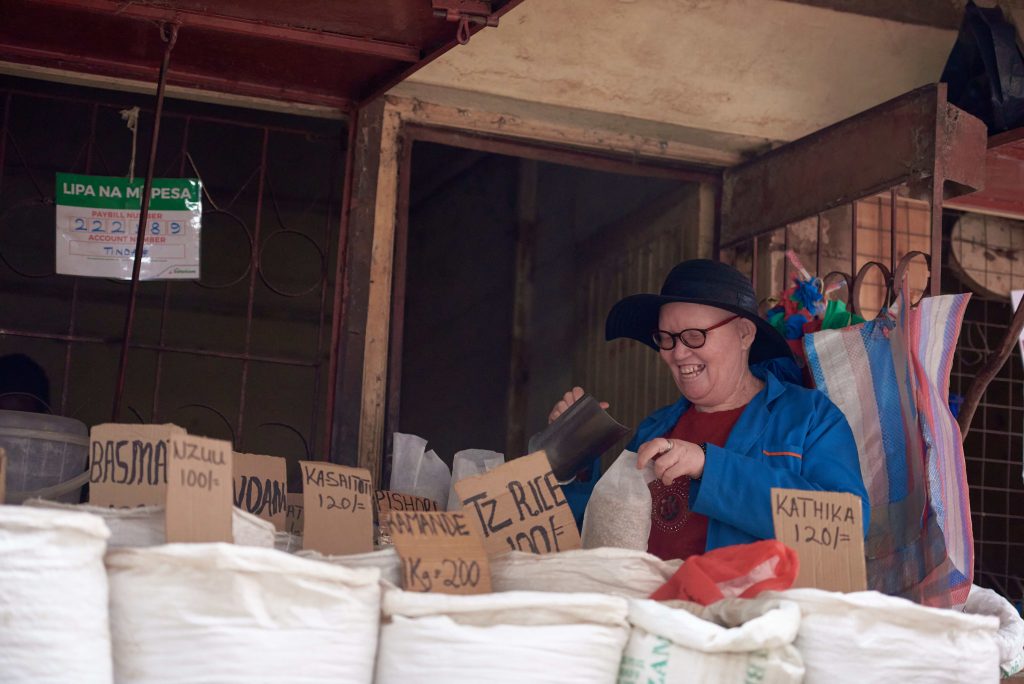 Jerita’s customers order cereals either in-person or through WhatsApp then pay via her PayBill number.

Not one to sit still and full of exceptional optimism, Jerita is now in real estate. She has built four rental houses and is currently constructing six two-bedroomed houses in Miwani, Machakos County.

Before the rental houses, Jerita ran a guest house for a while to boost her income.

Jerita is hands-on with all her businesses. Watching and keeping tabs that everything is going on as planned.

Part of this oversight, however, is done early morning when the sun is not too hot. 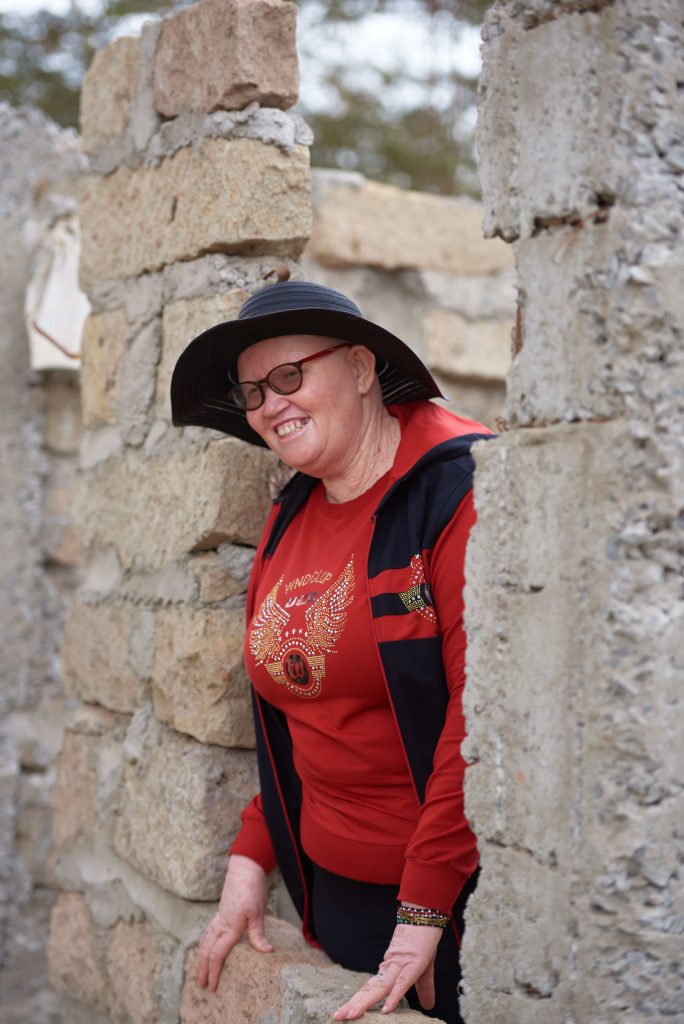 Jerita at the site of the ongoing construction of her rental houses.

Jerita has albinism, a genetic condition that means she has very light skin, hair, and eyes due to less melanin than usual in her body. Melanin gives skin, hair, and eyes their color. As such Jerita’s skin is very sensitive to light and sun exposure and she never leaves her house without her full brim hat, long-sleeved shirts and pants.

She was born in a family of five children, four with albinism and one without.

But one thing she is proud of is her parents, who raised her and her siblings as normally as they could, regardless of their disability.

“My father refused to take us to special schools. He said ‘there is no space for special people in this world. You must go to a normal school and interact with other people because I don’t have a special world for you. And that world is where you’re going to live,’” she says.

Albinism is also associated with vision problems and Jerita’s teachers were accommodating to to her shortsightedness. She was allowed to always sit at the front of the class, and whenever she couldn’t see the far end of the blackboard, she copied notes from her desk mate. Her examination papers were in large print to help her see well.

She only used to participate in indoor games as per her doctor’s advice to stay away from sun exposure.

Her parents, supportive as always, paid for private tuition at home to complement what she learnt at school and fill any knowledge gaps.

“I always encourage parents who have children with albinism to go and talk to the teachers, be there for the kids and explain the situation because they can fit in normal schools. Unless you are legally blind, then it becomes a challenge to go to a normal school,” she says.

While she credits her parents for preparing her (and her siblings) for the challenges she would face in the real world, it seems it did not completely shield her from society’s myths, superstition and beliefs about people with albinism.

Jerita, at 47 years, has heard offensive and discriminatory things said about people with albinism. But she doesn’t let those ignorant remarks slide.

“Somebody came and told me that he’s heard we have some special kind of blood which can make somebody rich. So, I asked him, ‘which colour were you told our blood is, and where did you get all this information?’ He told me our blood could make someone become a millionaire overnight. I had to be tough and involve county officers at the market to talk to him because for somebody to have that courage to come and tell you that, you never know what they’re planning or what will happen to you. So, this is a big challenge,” she said.

An act that inadvertently put her on a path to become an advocate for people with albinism. She is active on Facebook, where she champions for their rights and creates awareness on the need for inclusion and sensitisation of the challenges they face.

“My blood is red, and yours is red. What makes my blood so special that it can make someone rich? I just told the guy to go and work and not rely on free things. I’m also looking for money. If my blood was supposed to make me rich, what would I be doing here selling cereals? I would be rich, sleeping or cruising the world,” Jerita says. 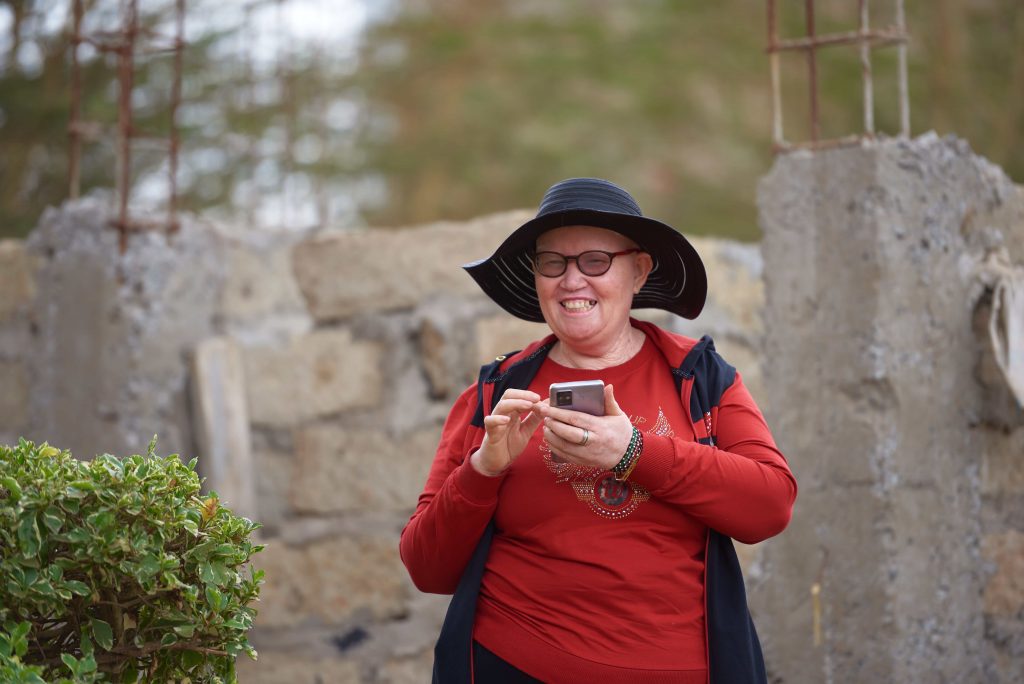 Through social media, Jerita advocates for People With Albinism and shines a light on their plight and need for inclusion.

Jerita shared while people with albinism get certain perks from the government to help with their economic empowerment. For example, when she was building her rental houses, as a person with disability (PWD), the Ministry of Lands and Planning waived the rates, which freed up some money to buy extra cement.

Jerita encourages anyone with a disability but more so people with albinimsto register with the National Council for Persons With Disability (NCPWD), which has a support program for PWAs that provides them with sunscreen lotion. It also offers protective clothing to prevent skin cancer and comprehensive eye care.

Jerita has big plans in the horizon too, and although she has not yet made up her mind, she is toying with the idea of vying for a political seat in the next election.

“We want to be involved politically through different programs, like from the Registrar of Political Parties, we’ve been able to have more PWDs register in different political parties. We want people to participate in politics because that will go a long way in having PWDs voices heard,” she says.

While social media has gone a long way in helping with her advocacy work, it has also become a huge marketing tool for her cereals business. She’s made plenty of friends on Facebook, but she has also gained customers from the platform. She also advertises on WhatsApp through the Status feature and says she has gotten a lot of business through referrals when people share her status. Sometimes people order directly via WhatsApp, pay through her M-PESA PayBill number and she delivers the goods to them.

Her tenants also pay through a PayBill number which Jerita says makes it easy to keep track of her money.

“Through the PayBill, money goes straight to my account. I prefer having the money in the account instead of cash to discourage unnecessary spending. And when it’s in the account it is safer and it helps me pay my loans on time,” Jerita says.

Oasis of hope springs forth in Taita Taveta

How Safaricom’s new kid on the block is simplifying payments