Faces of Safaricom – From the Navy to customer care

Nicholas Warutumo served in the Kenya Navy and then in private security before he landed a job at Safaricom as a driver. He is now a trained Customer Experience Executive and has been on quite an interesting career journey.

Tell us about yourself and what you do at Safaricom.

I am married, and also a father of two as well as a grandfather. I work at Safaricom as a professional driver and a Customer Experience Executive on the side.

How and when did you join Safaricom?

I joined Safaricom in 2007. I saw an advert in the dailies where the company wanted not only a mobile care driver, but also one trained in security, thus could handle a firearm. Six of us were shortlisted and I was fortunate enough to get the job.

What were you doing before joining Safaricom?

I have worked in diverse fields. I was a soldier in the Kenya Navy. I also worked as a driver at the Russian Embassy, and even as a security guard at a children’s home in Msabaha, Malindi.

What do you like the most about your profession?

Initially, it was just a means of putting food on the table, for lack of other things to do. But with time, after waking up to the fact that jobs were extremely hard to come by, I embraced driving as my career and realized its fruits after joining Safaricom. I have never looked back. I also get satisfaction from the fact that I provide an avenue to resolve customer issues, not forgetting that it has taken me to all corners of this country. From Lokichogio, Mpeketoni, Lamu, Mandera, Garissa, Busia, Loitoktok…name them, I have been there. 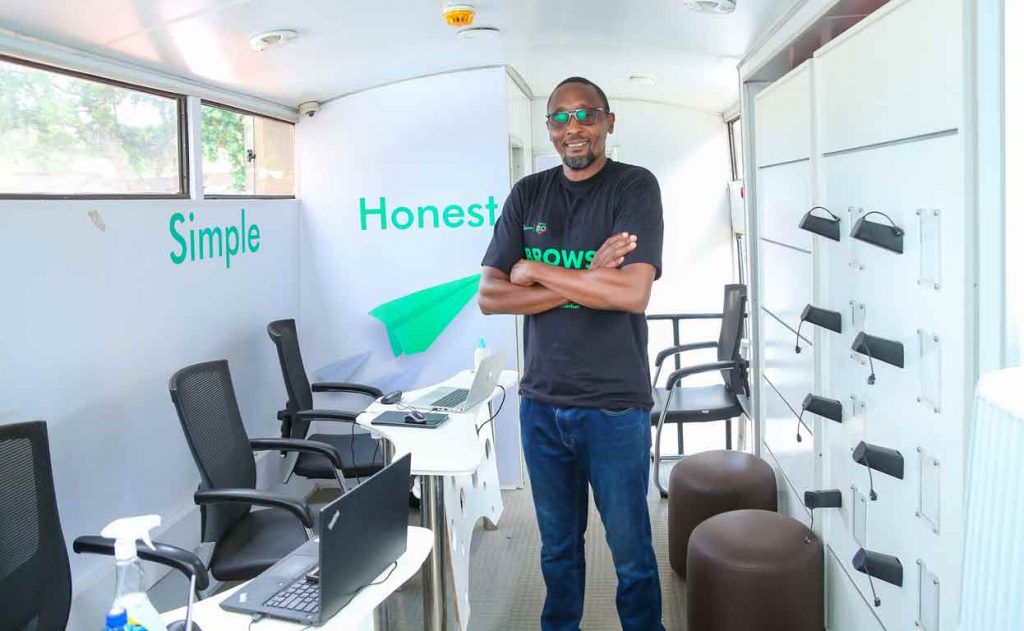 Nicholas Warutumo is a professional driver trained in security. He also works as a Customer Experience Executive.

How did your passion and/or your education lead to this role? You’ve made an unusual move, from a driver to a Customer Care Executive. How was the transition?

My bus was stationed in Eldoret as a temporary shop. My job was to simply open the doors in the morning to have the bus ready for work, and close it in the evening at 6pm. The kind of money I was earning before joining Safaricom and what I had just started earning was miles apart. To be sincere, I felt overpaid. I made a decision to add value to what I was doing as a driver. I would therefore try and vet the customers to keep them from queuing for hours while not having the prerequisite documentation. In those early days, the queue would be more than 300 metres long. My appreciation goes to the Pioneer Eldoret Shop Team. They mentored and moulded me. Two years or so later, I approached my Head of Department who gave the go-ahead for me to be trained as a CEE. I now happily drive and serve.

What was the most difficult part of the transition?

It was hard sitting in a class with guys in their 20s for over a month to learn, having not attended any class in over 20 years, then with very little computer knowledge. I ended up emerging top three in a class of 40 and got an Ideos phone for my good performance.

Tell us more about the mobile care bus.

The mobile care bus enables Safaricom to deliver its products and services in areas where we do not have a retail or care desk presence. My core duty is to ensure I deliver a customer touchpoint in the region. To effectively operate the bus, we work in collaboration with the retail and security teams. Over the years, I have seen the joy that a customer gets when they leave the bus with their issue sorted, and that gives me great satisfaction.

Nicholas assists a customer inside the mobile care bus.

What has been your greatest success based on the services you provide? Give us an example or two.

Sometime in 2012, the Retail Headquarters sent the Care Caravan to a round trip; the start point was Isiolo to Moyale via Marsabit to Wajir then Garissa. This was all rough road, for lack of a better word. We pioneered the company’s visibility. It was not only my most difficult activation, but also the most emotionally strenuous. We ended up being hosted by the provincial administration on completion of what was dubbed as the “Northern Eastern frontier activation”. Despite the hardships, it was very fulfilling.

What has been your greatest challenge in the job you do now and how did you overcome it?

Normal work challenges are always there in terms of administration and operations. That aside, my challenge arises mostly due to the fact that I take ownership of the Mobile Care activities when out there and with full support of the leadership team. This doesn’t always augur well with those who view me as the “driver,” a perception I am continually fighting.

What are the most valuable lessons you’ve learned in life and through your career?

Two key Lessons.
a) They say that “The Customer is always right”, I beg to differ. I say “Ensure you make the customer right”.
b) We always have the solutions. What we lack is the way to professionally communicate those solutions.

What do you do when you are not working? Who is Nicholas Warutumo outside the office?

Outside work I enjoy playing scrabble, I also love running, and it’s a passion. In my formative years in Safaricom I weighed well over 120kg. I am now at 84kg and I strive to run or walk a minimum of 30 kilometres a week, but always happy to do a 10-kilometre run daily when everything is right.

The coronavirus pandemic increased demand for our services. Here is how we coped

A journey through Kenya’s tech revolution

Planning for a secure financial future