Carving an easy future, on the back of M-Shwari

For many Kenyans, banking was an alien concept until about 10 years ago, when Safaricom introduced M-Pesa 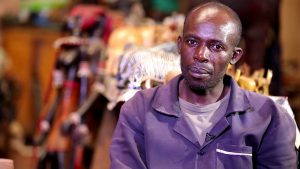 Just before M-PESA was born a decade ago, the country’s 41 commercial banks boasted a combined network of 400 branches and 600 ATMs. Because of the poor network, only 18.9 per cent of Kenyans were banked, another 7.5 per cent had access to other formal financial instruments like micro-finance institutions, 35.2 per cent were on informal instruments such as savings groups, and about 38.4 per cent were completely excluded financially.

Hudson Mikhali was part of these statistics, sitting uncomfortably on the side of the financially excluded.

Because of his jua kali (informal employment) occupation, he was not the type that commercial banks targeted, and so could not walk into a banking hall and open an account.

Hudson is a handicrafts dealer in Nairobi’s busy Kamukunji area, where he has carved a living for the last 14 years.

Every day he has to make sure he has enough money to buy wood for his carvings and pay his workers. But business isn’t an exact science.

“Sometimes I find myself overstretched and have cash shortages in the business. When I started out, the only recourse for loans was the micro-finance institutions or self-help groups I belonged to,” he says.

But these financing options were not reliable.

“I have a very narrow window between ordering my wood and paying my workers. At times, I may only have minutes within which to strike a deal,” he says.

But in 2013, this problem was solved following the introduction of M-Shwari, a mobile phone-based savings and loans product by Safaricom in partnership with Commercial Bank of Africa. It enables customers to save as little as Sh1 and borrow from Sh100 upwards – all of which is delivered on the phone.

It was a godsend. At least for Mikhali .

“All of a sudden, I could save and borrow money in a matter of minutes. I did not need to fill out tonnes of paperwork, I did not need guarantors, and the facility was processed instantly provided I have no pending loan.”

With that, he became part of the new banking platform that allows subscribers of Kenya’s biggest mobile network, Safaricom, to access banking services from their mobile phones without having to visit a conventional brick-and-mortar branch.

All of a sudden, I could save and borrow money in a matter of minutes. I did not need to fill out tonnes of paperwork, I did not need guarantors, and the facility was processed instantly provided I have no pending loan. Hudson Mikhali.

With the minimum transfer of cash set at Sh5, the application has revolutionsed day-to-day banking for the millions left out by the formal system, and is used for transactions ranging from sending money to faraway relatives to paying utility bills or even school fees.

Mikhali credits the growth of his business to M-Shwari, which has lent him cash to grow his business from a small outfit ran by one man to a firm exporting handicrafts to America and many parts of Europe.

“Now I can borrow and plough the money back into my business without delays,” he says.

While loans must be repaid within a month, a single fee of 7.5 per cent is charged, a far lower interest rate than what is charged by banks. Maximum loans depend on how much clients have in their M-Shwari accounts.

The mobile banking application has been so successful that on its first day of operations in early 2013, more than 70,000 new accounts were opened. Only 700,000 people in Kenya had a personal bank loan when M-Shwari was launched, and less than half this number had loans from micro-finance institutions.

It was a drop in the ocean compared to the transformation it was going to effect.

By 2016, M-Shwari had 14 million customers and had disbursed over Sh90 billion in loans, with a non-performing loan rate of only 2.2 per cent (after 90 days).

“I credit my personal success and the growth of my business to M-PESA and M-Shwari,” Mikhali says.

The freedom and convenience of mobile money choices allows him ample time and space to worry about the most important thing in the business; his creative process.

“Now I do not even need to travel,” he says. “All I do is make an order, inspect it when it gets to me, and make a payment to my supplier via M-PESA. Life has become much more bearable.”

We came together and great things happened