Cases of gender based violence are on the rise not just in Kenya, but globally. However, there's respite as the world seeks to address GBV prevention, response and mitigation.

The Coronavirus pandemic is turning into more than just a public health crisis. Besides its economic dimension, it is also linked to a spike in Gender-Based Violence (GBV).

Globally, according to UN Women, a United Nations entity dedicated to gender equality and empowerment of women, domestic violence helplines and rescue shelters have been reporting up to 33 per cent rise in distress calls. From France and the United Kingdom to Africa and the Middle East, cases have been on the rise.

“We must ensure that the rights and needs of sexual violence survivors are at the heart of response efforts and interventions, particularly as we fight the COVID 19 pandemic,” she said in a message to mark the 2020 International Day for the Elimination of Violence in Conflict marked on June 19 .

In Kenya, similar trends have been reported. A toll-free helpline, 0800 720 501, has been introduced by the Federation of Women Lawyers (FIDA-Kenya) as an alternative means of sending SOS due to movement restrictions during the pandemic for physical reports. The hotline received 289 calls between mid-April and early-May, most of them related to GBV.

Some counties are reporting up to seven defilement and rape cases, and harmful practices such as female-genital mutilation in their tens, during the pandemic, according to a joint statement by organisations involved in the fight against GBV in Kenya, led by the Coalition on Violence Against Women (COVAW).

It is feared that physical violence, psychological torture, defilement and arbitrary deprivation of liberties among other forms of violence, could continue rising as the pandemic persists. While women and girls are more vulnerable, men and boys are not spared.

Stay-at-home directives to contain the spread of COVID-19, means abused men, women and children are spending more time with their abusers. This is enabled and normalized by deeply rooted beliefs of male supremacy and the inverse assumption of the powerlessness of women perpetrated by both genders. Restrictions of movement, have also, inadvertently, cut off access to healthcare and other forms of support services.

Dr Kizzie Shako, a forensic medical practitioner, says that GBV—defined as any form of violence and discrimination against a person driven by gender inequality—manifests through emotional, physical, sexual, financial or psychological abuse.

GBV is among the most prevalent human rights violations reported across socio-economic and cultural groups in Kenya, according to the National Crime Research Centre. Following the pandemic, the Directorate of Community Policing, Gender and Child Protection of the National Police Service, set up a hotline, 0800730999, for reporting GBV in the country. The National Council on the Administration of Justice reported a spike in sexual offences in the two weeks following the national curfew in March 2020, accounting for 35.8 per cent of reported criminal matters. 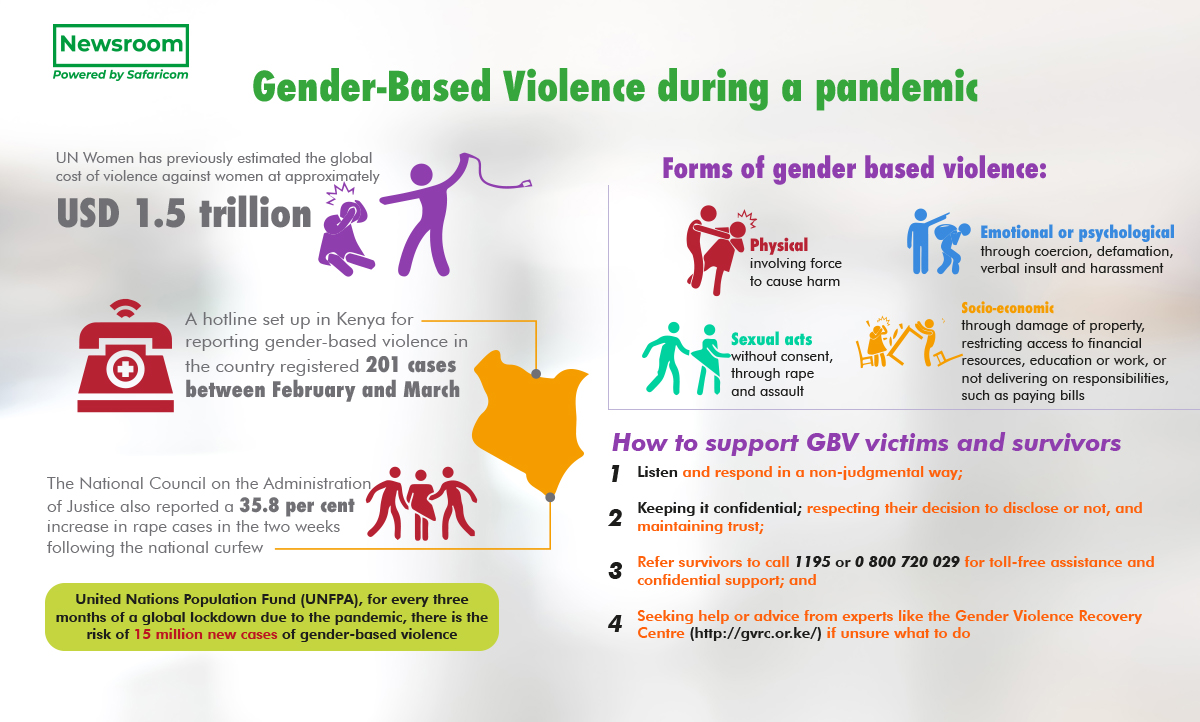 Similar trends have been reported across the world, a situation that is projected to worsen as the pandemic persists.

According to the United Nations Population Fund (UNFPA), every three months of a global lockdown due to the pandemic, risks adding 15 million new cases of GBV slowing down momentum towards eliminating the vice. This is as a result of increased violence and delays in deploying resources to support prevention efforts as the pandemic eats into budgets and attention.

Many incidences of GBV go unreported, sometimes persisting over extended periods of time, as the abused suffer in silence. Dr Shako attributes this to lack of knowledge and stigma.

“Many of the abused may not be aware that they have been violated. Others may not know that a violation ought to be reported or where and how to report,” she explains, adding that sometimes failure to report is deliberate due to lack of trust in authorities.

This is driven by fear that the perpetrator, in many cases a close relative, could fail to suffer consequences, placing the abused in harm’s way.

Dr Shako says: “Society stigmatises and shames the abused, who, many times endure blame. They are asked: ‘What were you doing in his house? Why were you dressed like that? Why didn’t you report earlier? Why didn’t you scream?’. This shaming that occurs at community level often has the abused feeling that if convincing a close friend or relative that they have been violated is so difficult, how then can they go to police or hospital”.

In hotlines, she sees an opportunity to encourage reporting.

To stem the rising cases, FIDA-Kenya now wants safe spaces and shelters set up in all counties, where the abused can escape. In addition to this, they want individuals at risk of abuse to be included in social protection measures for vulnerable populations. One such shelter was recently launched in Makueni County —a first state-run safe house for women and girls.

In identifying abused individuals, some tell-tale signs could give an inkling of what they could be going through.

For children, Dr Shako says, they may fear a person, bed-wetting, unusual behavior, tendency to hide and being withdrawn, poor appetite and a drop-in performance in school.

“For adults, there could be cases of depression, withdrawal or confusion. At later stages, one could excessively indulge in self-destructive behavior, such as multiple sexual partners and excessive substance use,” Dr Shako says.

Engaging one suffering GBV requires some sensitivity. Rather than pretend to be an expert, one would rather give practical help and suggestions. At all times, the need for confidentiality must be balanced with the duty of care. The survivor’s decision not to disclose must be respected, while always listening and responding to them in a non-judgmental way.

Unfortunately, these disturbing GBV cases do not just occur at home but in the workplace too, affecting productivity and wellness. It is critical for organisations to take a keen interest in identifying and dealing with these cases.

Safaricom has a clear policy on GBV including sexual harassment. The support for survivors is guided by workplace policies and procedures. Further, support from colleagues and supervisors is focused on addressing work-related problems in a supportive and non-judgmental way. Staff dealing with GBV can also get up to 10 days of paid leave, flexible working hours or changes in shifts, changes in office or working sites, and temporary reduction of work tasks and responsibilities. An Employees’ Assistance Programme is available to staff for confidential support on the toll-free line 0800720029.

Alternatively, they can reach out to the Safaricom security hotline on 0722007777; or a specialist trauma counselor, or legal services for advice on protection, or expert survivor support organizations such as the Gender Violence Recovery Centre.

As the world works towards delivering zero gender-based violence against women and girls by 2030, no effort should be spared in making this a reality.

How planting trees by this organization in Embu gave a voice to the deaf  Safaricom International Jazz Festival 2016 – The Grammy Affair From betrothal in the village to classroom beauty: The story of Samburu girls
By Safaricom Newsroom
Share on Facebook
Share on Twitter
Share on Whatsapp
View Comments

A tough one from the edge of the desert

What tech does for the blind