In the small village of Ngurunit in Samburu County, a Safaricom mobile phone mast impossibly located up a steep hill is not just a steel-and-mortar structure but a welcome, long-awaited invitation to connect with local communities, businesses, health care, and even the local administration.

Ngurunit, a small, idyllic village in Samburu County, looks like the stuff for which postcards were created. Serene, quiet and picturesque, it radiates warmth that can only be found in the bosoms of the vast wilderness straddling Marsabit and Samburu Counties.

But, even in its muted beauty, Ngurunit has had its small hardships; other than the harsh road network, the village has for decades suffered the discomforts occasioned by restricted or poor access to the modern superhighway – the cellular phone network.

For the residents, communicating using a cellphone was for years akin to a luxurious affair. It involved trekking hours in the sun and through desert where thorny scrubs hold forte, in search of a reliable network.

But a new dawn now shines on Ngurunit. 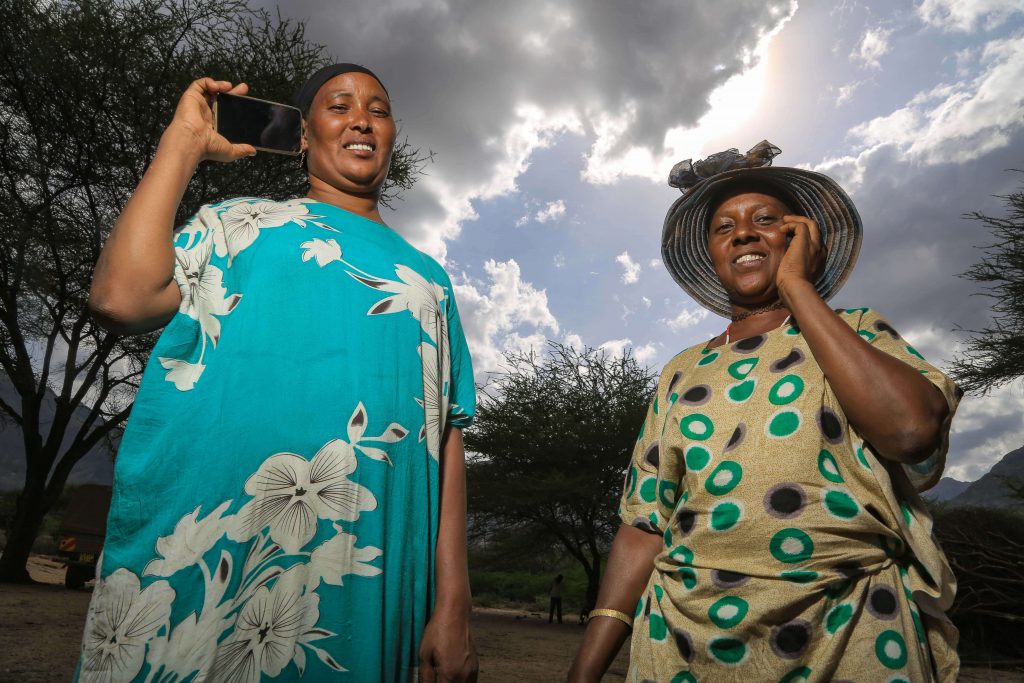 With the assistance of the local community, Safaricom has put up a cellular mast to serve over 4,000 homes, including in the nearby settlement of Illaut and sections of the busy Laisamis-South Horr highway.

For the thousands who call this place home, and for the thousands others who either visit or transit through it on sojourns to the far north, the tower, rising majestically into the African sky atop Kilabunyo Hill, is a game changer. It has not only transformed how families live and interact, but also how entire communities communicate and how traders run their businesses.

For Alex Lepiir, a livestock trader, the network tower has not only transformed how he conducts his business, but also improved efficiency in his transactions.

“Before the network we were operating in the dark,” he says, both metaphorically and literally.

“We would blindly take our livestock to the market hoping to find buyers, and more often than not we were not lucky.”

Another challenge are seasonal rivers that flow from the hills around Ngurunit and as far as more than 85 kilometres away from the hills around Maralal Town. Before Safaricom’s network arrived, the traders would get to the laga, as the seasonal rivers are known, and find it overflowing and uncrossable even while it had not rained locally for months. Now they can call ahead to find out if the laga is safe to cross.

Lepiir, who has been in the business for over five years now, say the cellular connectivity has now made the five-day trek to the animal market worth it.

“We are now able to get orders from our customers in Nairobi and Isiolo via phone, unlike before. Now we take to the market the exact number of livestock ordered.”

The network also makes communication easy incase a person out with livestock falls sick, if the livestock need treatment or in case of not-so-rare wild animal attack. 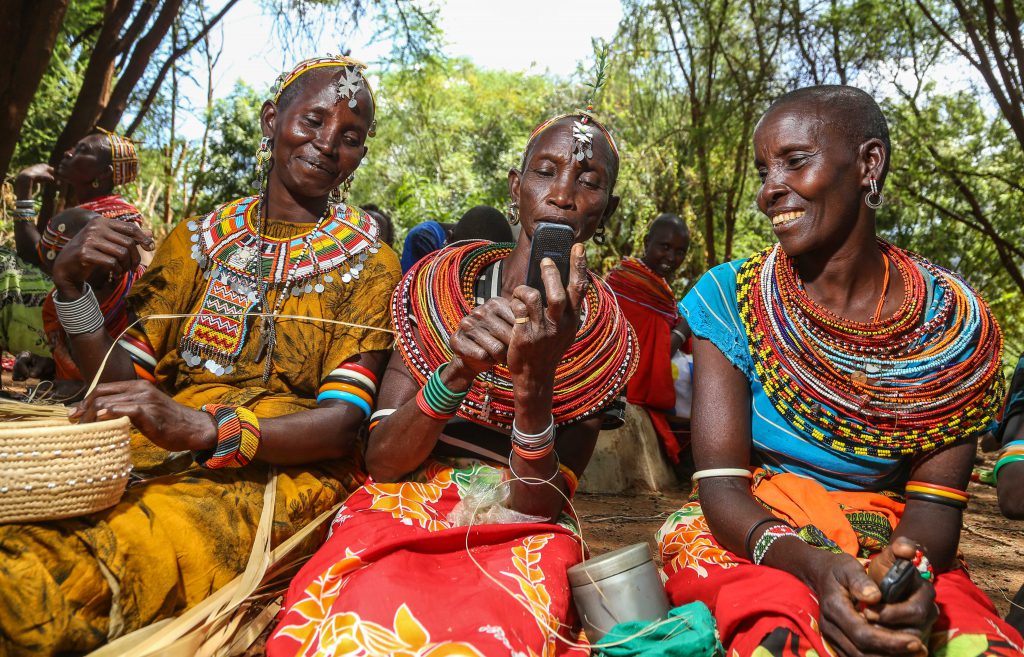 As businesses in the area thrive courtesy of the reliable connectivity, a group of 298 women in Ngurunit who run a micro- business making baskets are now weaving more connections. Through different social media platforms, they interact with their customers. Lilian Lekadaa, the leader of the group, says the women can now get orders online, both locally and even all the way from the United States of America.

“It is also easy to convene a meeting with the group whenever we get orders from customers. And our mode of payment is no longer limited to cash as we are now transacting through M-PESA which we also use to top up our airtime.”

Improved connectivity has not only benefited business people in the area, but also improved the administrative work of local leaders. Chief Samson Lepitiling, for instance, says holding meetings has never been easier.

“Right now I can easily convene a baraza or even attend meetings where I’m invited with ease,” he says, adding that it only takes “a phone call” for him to discharge his local government duties.

He further adds that the ease in communication has opened up the previously little known village to the outside world, and even helped promote the health of residents in dire need of emergency care as ambulances can now come for the sick.

The journey to Ngurunit’s connectivity

About a year ago Safaricom embarked on a mission to ensure that the over 4,000 residents of Ngurunit are connected to the most reliable network in the region. What started as maintenance of a cell tower in Korr led to the installation of network equipment in Ngurunit following a survey report that indicated that the community met the threshold for erection of a mast.

Haron Cheruiyot, a field engineer who oversaw the installation, says the site is currently generator-powered due to the unavailability of electricity connection in the area. He, however, adds that the long-term outlook entails the use of solar as the primary source of power.

“The generator uses diesel and it takes around 20 people to transport the fuel uphill to the site,” notes Cheruiyot. An innovative solution sees the generator run only 5 hours a day, consuming only 12.5 litres of diesel to power a bank of batteries that power the mast for the entire day.

The site will remain on diesel power for now due to commodity supply challenges occasioned by the Covid-19 pandemic. Once the solar equipment finally arrive, it will cut the hauling of diesel supplies up the one and a half steep hill to at most twice a year.

During the initial construction stages, transporting materials to the site proved a major challenge but the Ngurunit community mobilized to make the work easier. This, after all, was the small-yet-important transformation they had been yearning for since the introduction of mobile telephony in the country. 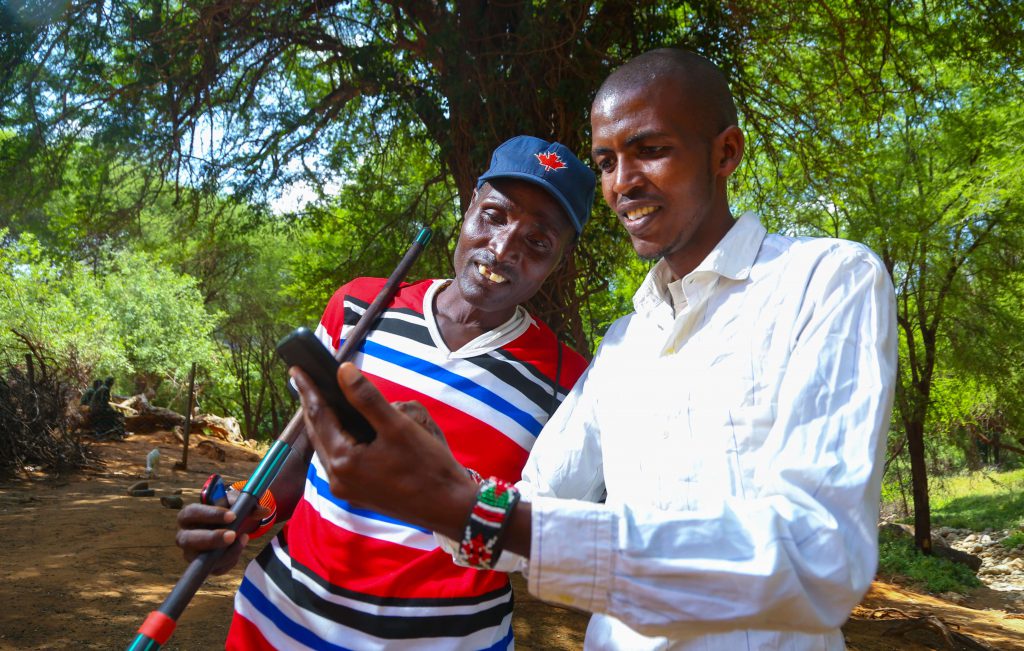 “I had yearned for connectivity to the Safaricom network, and even though I knew my body would ache after carrying the heavy equipment uphill, I knew in the end it would be worth it,” says Rongai Leaule, a local resident.

The journey uphill should ordinarily have taken him and his colleagues a matter of minutes, but hauling the stripped-down construction equipment to the top of Kilabunyo Hill took them three hours. The entire enterprise ran for days as men and women heaved and hummed in unison, hoping that the grit would translate to better days. They were not wrong as today the mast they helped put up, the tower of steel they invited into and accommodated in their sleepy village, has awakened its social, health, economic and administrative potential.

The youth are banking on more tourists, beckoned by the scenic Ngurunit Rock Pools, hikes up the picturesque hills and camping under the beautiful, starry nights.

It took eight months to put up the mast compared to the typical less than a month. For seven months, the site lacked power as the original plan to have a generator at the bottom of the hill and cables to the site proved untenable. The power reaching the mast at the top of the hill would not be enough, and the cables would be prone to vandalism rendering power supply unreliable. A promised solar solution would run into delays as the Covid-19 pandemic arrived, disrupting manufacturing and logistics around the world for months.

Eventually, a team of innovative engineers arrived at a workaround. The more than 1.2 tonne generator was taken apart into pieces, hauled up the hill bit by bit and reassembled back up. It took three nights for the young men to carry the entire generator and its 500-litre steel tank whole up the hill.

On August 30 2020, the generator purred to life and the Ngurunit Mast began blinking its red light into the starry skies. Down below, a flurry of activity could be observed as anyone with a mobile phone called from the comfort of their homes, letting the world know that Ngurunit was now part of the world’s information super-highway.

For today Ngurunit is not only talking with itself, but also with the rest of the world.

This story is part of the Safaricom@20 celebrations. For 20 years, Safaricom has developed new technologies and innovations to support and enable Kenyans to communicate, connect and to go beyond.

My 80 hectic days on the Home Fibre crew

A look at the hottest innovations from CES 2019