those that are less drawn to jazz

For the last five years, the Safaricom Jazz Lounge has been raising the bar for jazz in Nairobi, keeping its soul alive. And just like in previous years, the 2017 edition that went down on November 4 did not disappoint. The line-up was jam-packed with heavyweight musical talent from Kenya and other parts of the globe, bringing a wealth of legends to Nairobi and aptly electrifying the air at Uhuru Gardens.

Since 2013, Safaricom has been bringing together new talent and world-renowned figures from the electrifying world of jazz and nurtured what could undoubtedly be Eastern and Central Africa’s largest and most successful musical event.

It’s an event that fits the billing of a world-class festival similar to the well-established international jazz festivals held in major capitals of the world.

South Africa, for instance, hosts numerous festivals in its various cities all year round with the most prominent being the Jozi Jazz Festival in Johannesburg, and the Cape Town International Jazz Festival.

The Safaricom Jazz Lounge owes its success to the impressive organizational skills and commitment of Bob Collymore, CEO Safaricom, himself a jazz buff. A saxophonist who plays the horn in a pastime, Collymore conceived the idea of having this event upon discovering Kenya’s potential. And, indeed, he was spot-on.

The first edition of Safaricom Jazz Festival was held at the lush outdoor Ngong Racecourse, Nairobi, on February 2014 and was headlined by the New York-based Cameroonian singer-composer-bassist Richard Bona.

Welcoming both the audience and performers in his introductory speech then, Collymore, said that his company had realised there was demand for live jazz music in Nairobi, a city renowned for its vibrancy. He also acknowledged that Kenya is endowed with talented musicians who deserved recognition and to be celebrated.

In the past five years, the jazz event has featured, among others, some of Africa’s most celebrated jazz artistes. These include South Africa’s world-renowned jazz musician Hugh Masekela (he has been visiting and performing in Kenya since the mid-1980s), whose influence has inspired many in Africa. Others include guitarists, Jonathan Butler and Jimmy Dludlu and trombonist Siya Makuzeni and pianist Bokani Dyer.

Nigerian guitar sensation Kunle Ayo, has made two appearances in Nairobi. Other West Africans who have featured at the Safaricom Jazz Lounge include the seminal Malian singer-guitarist Salif Keita and fellow Fatoumata Diawara. The Paris-based Congolese Afro-jazz pianist and singer, Ray Lema, who played in the mid-1960s and 1970s with the late Tabu Ley Rochereau and Franco Makiadi, has entertained jazz lovers in Nairobi too. Uganda’s saxophonist Isaiah Katumwa wowed the crowd with his music. 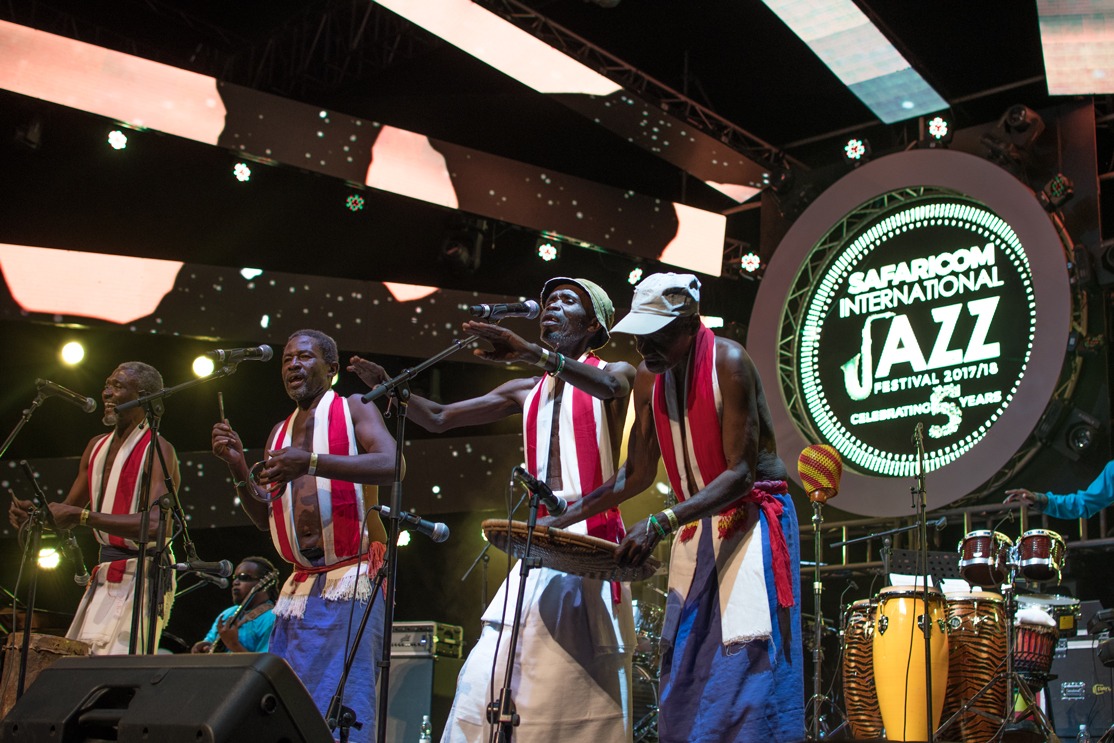 Musicians entertain the audience during this year’s Safaricom Jazz Lounge at Uhuru Gardens, Nairobi on November 4.

But perhaps the biggest names are award-winning ones. In fact, it had seemed like being in an American jazz concert given the ensembles’ lineups. For instance, what would have been a jazz fan’s reaction to sit and watch saxophonist David Sanborn blowing his horn? Just imagine yourself at a concert where the piano seat is occupied by Joey Calderazzo! Yes, these “possibilities” indeed became “real” at the Safaricom Jazz events. These two Americans performed in 2016 and early this year. Calderazzo accompanied the brilliant and award-winning saxophonist Branford Marsalis, the older brother to celebrated trumpeter Wynton.

In yet another Safaricom concert, three jazz giants from the US shared the same stage. The thrill created by saxophonists Gerald Albright and Kirk Whalum, and guitarist Norman Brown had never been anticipated by most fans in Nairobi. The three instrumentalists are renowned recording jazz artists, each with a collection of hits in the avant-garde jazz, jazz-funk, and straight-ahead jazz.

Proceeds from the Festival go towards supporting the Ghetto Classics, a programme that teaches music to youth from Korogocho. With about 650 beneficiaries, the programme is a brainchild of The Art of Music Foundation.

The Safaricom International Jazz Festival has evolved significantly and is effectively serving to contribute to the diversification of Nairobi’s and indeed Kenya’s cultural landscape by cultivating a jazz culture.

Dilemma of marketing to an ‘adlergic’ consumer